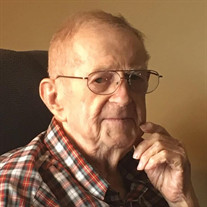 Adron H. Rafferty, Sr., 97, of Newburgh, passed away Sunday, May 10, 2020 at St. Vincent Hospital. Adron was born November 20, 1922 in Daviess County, KY to the late Everett and Tina (Nation) Rafferty. He married Emogene Ballard in 1941 and they were together for 64 years prior to her passing in 2005. After his tour of duty in the South Pacific during World War II, Adron did some farming but his true love was truck driving. He drove over the road for several trucking companies and retired from Smith Transfer. After retiring, he bought a Gold Wing motorcycle and with Emogene behind him they toured the country. In addition to his parents, Adron was preceded in death by his wife Emogene; brothers, Harvey, Norman and Durwood Rafferty; by a sister-in-law, Mary and by grandsons, Stuart Rafferty and Todd Neu. Surviving are daughters, Margaret (Don) Neu of Evansville and Karen (Keith) Whitacre of Florida; sons, Howard Rafferty, Jr. and Richard (Patty) Rafferty, both of Evansville; Cliff (Suzy) Rafferty of Newburgh, Roger (Jane) Rafferty of Owensboro, KY and Jack (Libby) Rafferty of Borden, IN. His legacy will be continued by his sixteen grandchildren, twenty-one great grandchildren and three great great grandchildren. Also surviving are two brothers, Bobby (Patsy) Rafferty of Owensboro, KY and Everett (Charlotte) Rafferty of Ocala, FL. Friends may visit with the family from 4:00 until 7:00 PM on Thursday at Pierre Funeral Home, 2601 W. Franklin Street. Graveside services will be held at 1:00 PM CST on Friday, May 15, 2020 at St. Francis Xavier Cemetery in Henryville, IN, with burial to follow. In lieu of flowers, Adron requested memorial contributions be made to St. Francis Xavier Cemetery Fund in Henryville, IN where he served as caretaker for many years and he and Emogene will be together forever. Please send any donations to St. Francis Xavier Catholic Church, c/o Cemetery Fund, 101 N. Ferguson Street, Henryville, IN 47126. The family would like to extend a special thank you to the staff at Hamilton Pointe Assisted Living for the care and patience with their dad in his final days. Condolences may be made online at www.pierrefuneralhome.com.

Adron H. Rafferty, Sr., 97, of Newburgh, passed away Sunday, May 10, 2020 at St. Vincent Hospital. Adron was born November 20, 1922 in Daviess County, KY to the late Everett and Tina (Nation) Rafferty. He married Emogene Ballard in 1941 and... View Obituary & Service Information

The family of Adron Howard Rafferty Sr. created this Life Tributes page to make it easy to share your memories.

Send flowers to the Rafferty family.