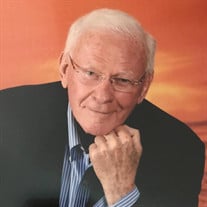 Albert W. "Doc" McClain, D.C., 88 passed away peacefully on July 10, 2021 at 5:30pm at the Linda White Hospice House in Evansville at 5:30pm, surrounded by his family. Doc was born May 22, 1933 in Terre Haute, IN. Doc attended Lincoln Chiropractic in Indianapolis and graduated in 1955. He was a scout master for years and enjoyed the interaction with the scouts and the badges they attained. Doc was a former member of the West Side Nut Club and was also a former member of the Kiwanis Club. Doc is survived by his wife, Linda "Lin" McClain and seven children, Kathy Behr (Douglas), Steven McClain (Joyce), Kevin McClain (Martha), Brian McClain, First Sergeant Trevor Helmer, District Investigative Commander Indiana State Police (Tracy), Wade Helmer (Andrea), and Sergeant Shawn Helmer Hillsborough County Sheriff's Office. He is survived by six grandchildren: Christopher McClain, Jonathan McClain, Brandon Helmer (Julia), Dylan Helmer (Sarah), Reed Helmer, and Rylie Helmer. Doc was preceded in death by the late Agnes McClain, Mother and his late father Albert McClain. Doc loved people and was always ready to laugh and enjoy both Friends and Family. He especially loved being referred to as "PaPa Doc" by his grandchildren. He loved to read, listen to music, work out in the woods and loved the outdoors, travel, dance and enjoyed all types of culinary experiences! Alaska and Hawaii were among his favorite places. Doc practiced on the West Side of Evansville for 41 years, and was President of the Indiana State Chiropractic Association. Doc knew he wanted to be a Chiropractor when he was 13 and loved helping people. He often said: "Limp in, leap out". He felt blessed with all of his wonderful patients and was very honored for the referrals they sent him and the confidence that they bestowed in him. He retired from his practice in 1996. Visitation will be held July 22, 2021 @10:00am at St Boniface Church followed by Mass @11:00 am, officiated by Father Steve Lintzenich. Donations can be made to Spirit Rylie at German American Bank (contact: Linda McClain) or flowers can be sent in care of Pierre Funeral Home. A Celebration of Life will be held at Burdette Park from 3-6pm at the Lakeside Shelter house. Come prepared to share stories! Condolences may be made online at www.pierrefuneralhome.com.

The family of Albert W. McClain created this Life Tributes page to make it easy to share your memories.

Send flowers to the McClain family.