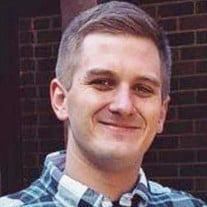 Andrew Grant Seibert, 31, of Evansville passed away on Sunday, April 19, 2020 peacefully surrounded by his family at Deaconess Midtown Hospital. He was born on December 9, 1988 in Louisville, Kentucky to James E. and Sue N. (Newcomer) Seibert. Andy was a member of Corpus Christi parish. He was a 2007 Mater Dei High School graduate where he played football and was a member of two state championship wrestling teams. Andy was an Eagle Scout in Troop 399. He also served in the Army National Guard. Andy was a kind-hearted son, brother, nephew, cousin and friend. He was an avid Detroit Lions fan who enjoyed his kitten Nala and was very creative, especially with painting. His favorite quote to live by was, “If you spend your whole life waiting for the storm, you’ll never enjoy the sunshine.” Andy left this earth as a hero donating his organs to those in need. We’re especially thankful to the excellent care Andy received from the Deaconess Trauma team and the Indiana Donor Network. In addition to his parents, he is survived by his sisters, Leigh and Amy Seibert, his brother Nathan, his grandmother Kathryn Seibert, his aunts Lana (Ralph) Glaser, Jane (Jim) Balbach, Jerri (Eddie) Woodarz, Virginia Gamble, his uncle John Seibert, as well as his cousins. Due to the current pandemic, no services will be conducted at this time. In lieu of flowers, memorial contributions may be made to Boy Scout Troop 399 or the Indiana Donor Network. The family also encourages everyone to consider being an organ donor. Condolences may be made online at www.pierrefuneralhome.com.

Andrew Grant Seibert, 31, of Evansville passed away on Sunday, April 19, 2020 peacefully surrounded by his family at Deaconess Midtown Hospital. He was born on December 9, 1988 in Louisville, Kentucky to James E. and Sue N. (Newcomer) Seibert.... View Obituary & Service Information

The family of Andrew Grant Seibert created this Life Tributes page to make it easy to share your memories.

Andrew Grant Seibert, 31, of Evansville passed away on Sunday,...

Send flowers to the Seibert family.