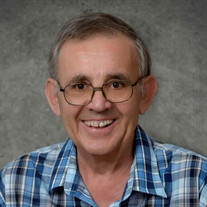 On October 5, 2021, Carl A. Schmitz, 70, of Wadesville, IN, left his earthly life and met his heavenly father. He transitioned peacefully at the Linda E. White Hospice Center in Evansville. He survived 11 months after being diagnosed with stage 4 cancer. Carl was born in Evansville on March 12, 1951, to Earl and Esther (Reineke) Schmitz. He lived his entire life in Posey County, Indiana, on the family farm (Dutchman Farms, inc.). He met and married the love of his life, Delene (Phillips) Schmitz, on July 21, 1979. Carl graduated from North Posey High School in 1969 where he was very active in the FFA, serving as a state officer in 1970. He was also active in Rural Youth for 8 years. He lived a very active lifestyle. His first venture was to scale up the family dairy farm, routinely milking his herd of registered Holsteins. In addition to the cows, Carl assisted in hay and grain farming on the family operation. He was also Northern Ohio Breeder’s Association Semen Salesman for Southern Indiana for 7 years, and a cattle auction ringman for McIntyre and Wiley, and Price and Leffler Auctioneers. Carl was elected to the Posey County Commissioners in 2012 and was currently serving the beginning of his third term in office. He loved serving his community through this office, as well as service with the United Caring Shelter, United Caring Services Establishment Board, Robinson Township Conservation Club, charter member of the Southwestern Indiana Holstein Breeders Association, Evansville Young Dairymen, Indiana Milk Promotion Board, National Dairy Promotion and Research Board (a Presidential appointment), Posey County Farm Bureau, Inc., Posey County – Purdue Extension Board, North Posey FFA Advisory Board, Posey County Ag Day, judge for various FFA Career Development Events, 22 year delegate and director for Dairymen, Inc. (DFA), at one point winning the Kyana Young Dairy Couple contest. Carl with three others were founding organizers of Partners in Food, and he was instrumental in helping find funding to establish God’s Storehouse. He was farm and animal manager for the movie A League of our Own, partially produced on one of Dutchman’s farms. At Zion Lippe United Church of Christ, Carl was involved with the church council, a choir member, Sunday School superintendent and teacher, charter member of the Odds and Ends Sunday School Class, and restarted Men and Boys Brotherhood, as well as cooking for many fundraisers and funeral dinners. Carl was honored by receiving the following awards throughout his lifetime: Master Farmer Award, 50-year United Commercial Travelers of America Award, Life Membership to the Dairy Shrine Club, Poseyville Kiwanis Distinguished Citizen Award, and 50-year member of Robinson Township Conservation Club. The Sagamore of the Wabash and Kentucky Colonel awards were bestowed upon Carl by the governors of Indiana and Kentucky. He was survived by his wife, Delene (Phillips) Schmitz; sister, Nancy (Schmitz) Dougan; brother and sister-in-law, Albert and Tanya (Mofield) Schmitz, as well as his son and daughter-in-law, Hans and Cindy (Madden) Schmitz; daughter and son-in-law, Carolina (Schmitz) and Michael Patterson. The highlight of his life was spending time with his grandchildren: Jackson Madden, Paige, Levi, and Josiah Patterson, and Harper Schmitz. He was preceded in death by his parents, Earl Schmitz and Esther (Reineke) Schmitz, sister-in-law, Christine (McFadin) Schmitz, and his brother-in-law, Galen Dougan. Funeral services will be held at 11:00 AM on Monday, October 11, 2021 at Zion Lippe UCC, Rev. Jeff Long officiating. Burial will follow in the Zion Lippe Church Cemetery. Following funeral services at the church, there will be a meal and story-time held at the Robinson Township Conservation Club. The time there will last until the fellowship has concluded. Friends may visit with the family from 3:00 until 7:00 PM on Sunday at Pierre Funeral Home, 2601 W. Franklin Street and from 10:30 AM until service time on Monday at Zion Lippe UCC, 9000 Copperline Road, Mt. Vernon, IN 47620. In lieu of flowers, contributions may be made to Partners in Food, God’s Storehouse food pantry, or Zion Lippe UCC. Condolences may be made online at www.pierrefuneralhome.com.

On October 5, 2021, Carl A. Schmitz, 70, of Wadesville, IN, left his earthly life and met his heavenly father. He transitioned peacefully at the Linda E. White Hospice Center in Evansville. He survived 11 months after being diagnosed with stage... View Obituary & Service Information

The family of Carl A. Schmitz created this Life Tributes page to make it easy to share your memories.

Send flowers to the Schmitz family.