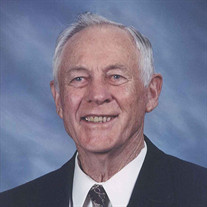 Clarence L. Mesker, 93, of Evansville, passed away Friday, October 30, 2020 at the Solarbron Terrace. Clarence was born December 7, 1926 in Evansville to the late George and Elizabeth (Schell) Mesker. Clarence was a life member of St. Agnes Catholic Church, now part of St. Boniface Catholic Church; where he and his wife Rosalie were inducted into the Brute Society of the Diocese of Evansville for their service to the church. He was a grain farmer all of his life, mostly in the river bottoms of Union Township; a member of the Crop Improvement Association, past member of Soybean Growers Association, the Riverbend Association, an active member of Germania Maennerchor, an active volunteer with the 4-H Fair, the Owls and the Eagles. Clarence was a very talented wood worker from building furniture to delicate Christmas ornaments. He enjoyed wood carving and intarsia utilizing a variety of woods, many of foreign origin. Clarence enjoyed quizzing people to see if they could identify the species of wood and when they couldn’t he took delight in educating them on the specifics. Surviving Clarence are his wife of 70 years, Rosalie (Orth) Mesker; three daughters, Betty (David) Cummings; Jane (Herb) Lovelace and Donna Mesker; grandchildren, Kevin Cummings, Jessica (Bryan) Schultheis, Sarah Lovelace and Mark (Malyssa) Lovelace and four great grandchildren, Caroline and Sally Schultheis and Penny and Violet Lovelace. In addition to his parents, Clarence was preceded in death by a daughter, Rose Ann Mesker in 1973; by sisters, Leona Deig, Norma Herrmann, Elnora Fischer and Verna Winiger and by brothers, Arthur, Edward and George Mesker. Due to the pandemic, the visitation and Mass of Christian Burial will be private. Burial will take place in St. Joseph Cemetery. Memorial contributions may be made to Westside Catholic School, 1620 Glendale Ave, Evansville, IN 47712 or to Germania Maennerchor, 916 N. Fulton Ave, Evansville, IN 47711. Condolences may be made online at www.pierrefuneralhome.com.

Clarence L. Mesker, 93, of Evansville, passed away Friday, October 30, 2020 at the Solarbron Terrace. Clarence was born December 7, 1926 in Evansville to the late George and Elizabeth (Schell) Mesker. Clarence was a life member of St. Agnes... View Obituary & Service Information

The family of Clarence L. Mesker created this Life Tributes page to make it easy to share your memories.

Send flowers to the Mesker family.