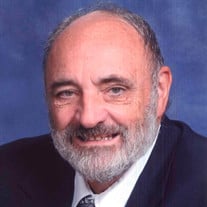 Daniel Matthew Weinzapfel, 82, passed away Thursday evening surrounded by his family. Dan was born November 4, 1938, in Evansville, to the late Matthew and Olivia Weinzapfel. He graduated from Mater Dei and U of E and attended IU Medical School. In 1965, he married Kathy Heichelbech. Dan is survived by his wife Kathy, son Daniel J. Weinzapfel (Cathy), two daughters Theresa Purdy (Jeff), Mary Lee (Ron) and six grandchildren: Joy and Matthew Weinzapfel, Nicholas, Jacob, Hannah Purdy and Becca Lee. He is also survived by his brother James A. Weinzapfel (Sandy) and sister-in-law Julie Teder and nieces and nephews. In addition to his parents, Dan is preceded in death by his sister Pat Stinson and brother-in-law Ed Teder. He worked in Indianapolis for Standard Brands and then moved to Evansville where he was a health inspector for Vanderburgh County. He was a member of the Germania Maennerchor and sang in the choir. As a longtime member of Sts. Mary & John Church, he was a member of the choir. Dan had an interest in gardening and playing cards, especially Clabber and Hand and Foot. He was a member of the Kentucky Bee Club. He was a member of the writers' club, who helped him write his book “The Gospel of Daniel.” This book, written in 2004, is based on Dan's relationship with God through the character Marcus, who represented much of Dan's discovery of God's love. Dan wanted people to know he looked forward to meeting the Trinity and having a new youthful body, with his strength, hearing, and eyesight restored, Visitation will be from 3:00-7:00 p.m. Thursday, September 23rd at Pierre Funeral Home with a prayer service at 7:30 p.m. A funeral mass will be at Sts. Mary and John at 1:00 p.m. On Friday, September 24th. A burial service at St. Joseph Cemetery will occur at a later date. Donations can be made to Sts. Mary and John St. Vincent de Paul Society, Sts. Mary and John Food Pantry, or Evansville Cancer Association.

Daniel Matthew Weinzapfel, 82, passed away Thursday evening surrounded by his family. Dan was born November 4, 1938, in Evansville, to the late Matthew and Olivia Weinzapfel. He graduated from Mater Dei and U of E and attended IU Medical School.... View Obituary & Service Information

The family of Daniel M. Weinzapfel created this Life Tributes page to make it easy to share your memories.

Send flowers to the Weinzapfel family.