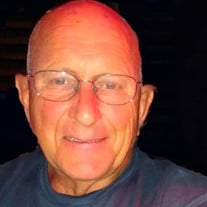 David Jon Carl, 76, of Evansville, passed away on Thursday, January 14, 2021 at Deaconess Hospital Midtown Campus. David was born December 10, 1944 in Evansville to the late Henry and Aline (Sander) Carl. He was the fourth of six children and a proud 1962 graduate of FJ Reitz High School. He went on to graduate from Evansville College. He worked for SIGECO before retiring as a coal handling foreman. David was a life member of the Pit Barbell Club, Past President of the R-Mens Varsity Club, Riverbend Association, River City Eagles and St. Paul’s UCC on West Michigan Street. He was a great father; enjoyed the outdoors, hunting, his family and time spent by the pool. David loved to share memories about his active past. Before Thunder on the Ohio, there were local boat races and he was proud of his second-place trophy. David was a proud supporter of IU and UE basketball, the Indianapolis Colts, St. Louis Cardinals and all things Reitz High School and the blue and gray. For many years, friends, family and Union Township neighbors would gather for his annual Burgoo. David also loved to help the Hauschild family with butchering. He took pride in hand mixing the sausage. David loved his wife Terri; their new life began at the Kentucky Derby Party in 2004. He also enjoyed his friends and trips to Florida. Surviving David are his wife of 14 years, Terri Baize Carl; one son, Jon (Kim) Carl; daughters, Rachel (Montay) Crowder of Indianapolis, IN and Niki (Neil) Lynn; grandchildren, Nathan Elder, Baylee Lynn, Monyay, Zion and Zaylee Crowder, Morganne Geiser and Brinkley Carl; brothers, Dr. Richard (Judy) Carl of Ellettsville, IN and Robert “Butch” (Willa) Carl; sister, Deborah (Mike) Wolf; his mother-in-law, Shirley Baize; brothers in law, Mike (Fran) West and Leroy (Terry) Baize, Jr. and many nieces and nephews. In addition to his parents, David was preceded in death by sisters Judy West and Carole Carl. Due to the pandemic, visitation and funeral services will be private. Burial will take place in Memorial Park Cemetery. The family would like to extend a special thank you to Dr. Mark Browning, the ICU team at Deaconess Midtown Hospital and their Union Township neighbors for their care and concern. In lieu of flowers, memorial contributions may be made to the R-Men’s Club, P.O. Box 6071, Evansville, IN 47719-0071 or to the Vanderburgh County Humane Society, 400 Milner Industrial Drive, Evansville, IN 47710. Condolences may be made online at www.pierrefuneralhome.com.

David Jon Carl, 76, of Evansville, passed away on Thursday, January 14, 2021 at Deaconess Hospital Midtown Campus. David was born December 10, 1944 in Evansville to the late Henry and Aline (Sander) Carl. He was the fourth of six children... View Obituary & Service Information

The family of David Jon Carl created this Life Tributes page to make it easy to share your memories.

David Jon Carl, 76, of Evansville, passed away on Thursday, January...

Send flowers to the Carl family.