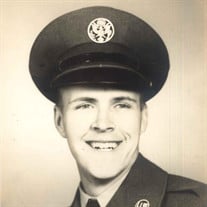 David W. Gentry, Jr., 86, of Evansville, passed away Friday, May 1, 2020 at his home. David was born November 29, 1933 in Evansville to the late David W. Gentry, Sr. and Vivian (McDaniel) Gentry. He was a 1951 graduate of Bosse High School and a 10-year veteran of the United States Air Force. While in the Air Force, David was stationed in Texas, at the Pentagon in Washington, D.C., Korea, South Carolina, Japan, Greenland and Virginia. After leaving the Air Force, David worked at Ball Plastics and had a route delivering newspapers for the Evansville Courier. After retiring from his newspaper route, David enjoyed spending time with his friends at Franklin Lanes, where he bowled in several leagues. Surviving David are a brother, Norman Gentry of Owensboro, as well as friends and caregivers, David, Colleen and Jake Dubber. In addition to his parents, David was preceded in death by his stepmother, Ruth Gentry and by a brother, Robert Gentry. Private visitation and funeral services will be held with burial at Park Lawn Cemetery. Pierre Funeral Home is handling arrangements. The family would like extend a special thank you to Home Instead and Deaconess Hospice for their kind and compassionate care. Memorial contributions may be made to Vanderburgh County Humane Society, 400 Millner Industrial Drive, Evansville, Indiana 47710, 812-426-2563, https://www.vhslifesaver.org. Condolences may be made online at www.pierrefuneralhome.com.

The family of David W. Gentry Jr. created this Life Tributes page to make it easy to share your memories.

Send flowers to the Gentry family.