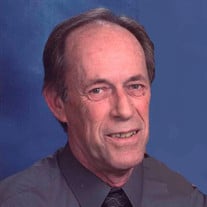 David R. Will, 68, of Haubstadt, passed away Tuesday, August 3, 2021 at the Linda E. White Hospice House surrounded by his family. David survived a severe heart attack in 2015 and had lived with a heart transplant since 2017, only to succumb after a courageous battle with ALS. David was born December 2, 1952 in Evansville to the late Wilfred and Eileen (Logsdon) Will. During his younger years, David was a volunteer with the German Township Fire Department. He worked in the Bio Med Electronics Department of Deaconess Hospital for 23 years and as the maintenance manager for Health South Rehabilitation Center before retiring from The Crossing Apartments as the maintenance manager. He was an active member of Sts. Peter and Paul Catholic Church; serving as the President of the PTO and on the Stewardship Committee. He was inducted into the Brute` Society of the Diocese of Evansville for his service to the church in 1998. David also served as a Boy Scout Master of Troop 246 in Haubstadt and was a veteran of the United States Navy. He was at his best when he was helping others through mentoring or as a tutor. Surviving David are his wife of 44 years, Lucy (Ziliak) Will; two sons, Glenn (Vong Hang) Will and Jeff (Kevin Looney) Will; three sisters, Alice Foster, Rose (Dave) DeWitt and Marie (Bill) Kothe and three brothers, Rick (Kathy) Will, Charlie (Debbie) Will and Mike Will. In addition to his parents, David was preceded in death by a nephew, Ben Will and infant nephew, Michael Seib. There will be a Mass of Christian Burial held at 11:00 AM on Monday, August 9, 2021 at Sts. Peter and Paul Catholic Church, Rev. Christopher Droste officiating. Burial will follow in the Sts. Peter and Paul Church Cemetery, where the Vanderburgh County Retired Veterans Memorial Club will conduct military rites. Friends may visit with the family from 1:00 until 6:00 PM on Sunday at Pierre Funeral Home, 2601 W. Franklin Street and from 10:00 AM until service time on Monday at Sts. Peter and Paul Catholic Church. Memorial contributions may be made to Deaconess Hospice, 611 Harriett Street, Evansville, IN 47710, to the Indiana Donor Network, 3760 Guion Road, Indianapolis, IN 46222, to the ALS Association Indiana Chapter, P.O. Box 56023, Indianapolis, IN 46256 or to Sts. Peter and Paul Catholic Church, 211 N. Vine Street, Haubstadt, IN 47639. The family would like to extend a special thank you to the staffs of both Deaconess Hospice and the Linda E. White Hospice House for their exceptionally kind and compassionate care. Condolences may be made online at www.pierrefuneralhome.com.

David R. Will, 68, of Haubstadt, passed away Tuesday, August 3, 2021 at the Linda E. White Hospice House surrounded by his family. David survived a severe heart attack in 2015 and had lived with a heart transplant since 2017, only to succumb... View Obituary & Service Information

The family of David R. Will created this Life Tributes page to make it easy to share your memories.