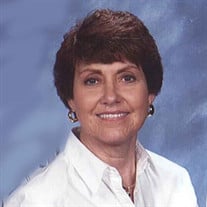 On October 27, 2020 Dena Charlene Youngs Bauer passed away at her home at the age of 74. She was born in St. Louis, MO to Charles and Dora Youngs; later the family would move to Granite City, IL, where she would graduate from Granite City High School in 1964. She received her BS in home economics education from Southern Illinois University in 1969 and later a Master’s in Education from Murray State University in 1982. She taught home economics in Alabama, Georgia, Kentucky, Illinois, and Indiana. In 1995, she received her license for elementary education from University of Southern Indiana. During her career with EVSC, she taught home economics at Helfrich Park and Glenwood; she then retired from Hebron Elementary in 2003. In retirement, she had more time to devote to her passion of quilting. She was a member of the Raintree Quilter’s Guild and received numerous accolades for entries into quilt shows. Dena and Larry also enjoyed traveling in their retirement. They spent many winters in Florida and summers in Cranberry Portage, Manitoba. She also enjoyed recent trips with friends and family to Italy, Germany, Scotland, Ireland, and Peru. Dena was also an active member at her church, Oakhill Bible Fellowship. Dena was preceded in death by her father, Charles Youngs, and her mother, Dora Youngs. She is survived by her husband of 42 years, Larry Bauer; her two daughters, Gretchen (Daniel) Redd of Prospect, CT and Natalie (Ryan) Neufelder of Haubstadt, IN; and her five grandchildren, Casey and Emma Redd of Prospect, CT and Jeptha, Cora, and Hayes Neufelder of Haubstadt, IN. She is also survived by her brother, Ron (Patrice) Youngs of Mt. Carmel, IL; a sister, Janet Youngs of Baltimore, MD; one nephew; two nieces; and numerous cousins. Visitation will be held at Pierre Funeral Chapel on Friday, October 30, 2020 from 1-4 PM with a memorial service to follow. Interment will occur at a later date at Laurel Hill Cemetery. In lieu of flowers, the family requests donations to be made to Shriner’s Children’s Hospital. Condolences may be made online at www.pierrefuneralhome.com.

On October 27, 2020 Dena Charlene Youngs Bauer passed away at her home at the age of 74. She was born in St. Louis, MO to Charles and Dora Youngs; later the family would move to Granite City, IL, where she would graduate from Granite City High... View Obituary & Service Information

The family of Dena Charlene Bauer created this Life Tributes page to make it easy to share your memories.

Send flowers to the Bauer family.