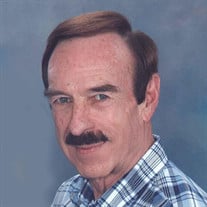 Donald Lee Kiefer passed away peacefully at home on Wednesday, April 29, 2020. He was born at his home in Ft. Branch, Indiana on August 28, 1938 and was the son of the late Carrie and Paul Kiefer, the youngest of their six children. Don graduated from Fort Branch High School in 1956 and joined the United States Marine Corp a few months later. He was stationed at Camp LeJeune, where he served our country and received an honorable discharge in 1962. Upon returning home he went to work at Mead Johnson and began taking classes at U of E. It took seven years of night classes, but he proudly graduated in 1969. Don advanced during his career at Mead Johnson and retired as a Senior Project Manager for the Data Processing Department at the age of 55. Don loved sports and excelled at basketball, softball, baseball, track and golf. Later in life he became a huge fan of the St. Louis Cardinals and NASCAR racing. He was also a master at word puzzles and enjoyed spot shoots. He loved his dogs and had three very special Labs over the years. Don married Jaylene Farmer Kiefer on June 7, 1980. This year would have been their 40th wedding anniversary. In addition to his wife, best friend and most ardent supporter Jaylene, Don is survived by his daughters Lisa Appel (Terry), and Kelly Dickson (Paul) of Charlotte, NC, son Ryan Farmer (Rachael), and sister-in-law Janet Scharf (Tom). Don is also survived and was the proud grandfather, or Pops, of Cara Reising (Josh), AJ Gantner, Ronin, Ruby, Belle and Zeke Farmer, and great grandchildren Reagan and Ross Reising, along with several nieces and nephews. Don is preceded in death by his siblings and a grandson, Joshua Alan Gantner. The family would like to thank Heart to Heart Hospice for their care and compassion. There will be a private service for the family at Alexander Memorial Park. Donations can be made to Alzheimer’s Association of Evansville, 701 N. Weinbach Avenue, EVV 47711 or Habitat for Humanity, 560 E. Diamond Ave., EVV 47711. Condolences may be made online at www.pierrefuneralhome.com.

Donald Lee Kiefer passed away peacefully at home on Wednesday, April 29, 2020. He was born at his home in Ft. Branch, Indiana on August 28, 1938 and was the son of the late Carrie and Paul Kiefer, the youngest of their six children. Don graduated... View Obituary & Service Information

The family of Donald L. Kiefer created this Life Tributes page to make it easy to share your memories.

Donald Lee Kiefer passed away peacefully at home on Wednesday,...

Send flowers to the Kiefer family.