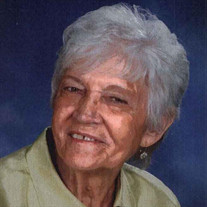 Edna Tresia Gish, 90, of Evansville, passed away Wednesday, October 8, 2020 at Deaconess Hospital Midtown Campus. Edna was born January 27, 1930 in Evansville to the late Peter and Josephine (Seib) Fehrenbacher. Edna worked for Gibbs Die Casting in Henderson for many years before her retirement. She was a former member of Holy Name Catholic Church in Henderson and the VFW Post #1114 Ladies Auxiliary. Surviving Edna are her daughter and son-in-law, Sandra and Carl Barron of Clearwater, FL; her son, Tim Deig of Evansville; a sister, Rosalie Hartman of St. Louis, MO; sister-in-law, Marian Fehrenbacher; cousin, Norma Freeman; grandchildren, Andrea (Casey) Chmielewski of Virginia and Scott (Laura) Barron of Florida and four great grandchildren. In addition to her parents, Edna was preceded in death by a daughter, Gail Deig on September 24, 2020; by sisters, Marian Ellsperman, Iona Deig and Catherine Miller and by brothers, Verner, Gilbert, James, Raymond and Wilbur Fehrenbacher. Due to the Covid-19 pandemic, funeral services will be private. Entombment will be held in St. Joseph Mausoleum. Pierre Funeral Home is assisting with arrangements. Condolences may be made online at www.pierrefuneralhome.com.

The family of Edna Tresia Gish created this Life Tributes page to make it easy to share your memories.

Send flowers to the Gish family.