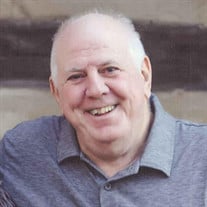 Edward O. “Big Ed” Burnett, loving husband, dad and pap (also known as “pappy”), passed away Monday, August 3, 2020 at Deaconess Gateway Hospital. Ed was born December 2, 1946 in Evansville to the late James Edward and Jeannette (Crockett) Burnett. He was a 1965 graduate of FJ Reitz High School; served his country in the US Air Force during the Vietnam War and was a life member of VFW Post #1114. Ed retired from PPG Industries where he worked a rotating shift for over 30 years. Even though he worked six or seven days a week, he always made time to coach his sons’ baseball teams at Holy Redeemer Catholic School. Some of Ed’s favorite things to do included mowing his yard, operating his Case tractor, bird hunting, elk hunting in Colorado, watching IU basketball, riding his Honda Gold Wing with his wife Vicky and celebrating Christmas with his children, their spouses and all of his beloved grandchildren. In addition to his parents, Ed was preceded in death by a sister, Catherine Sharon Baldwin; brother, William “Bill” Burnett and grandsons, James Burnett, Ethan Burnett and Luke Dressler. Surviving Ed are his wife of 53 years, Vicky (Roedel) Burnett; sons, Edward Paul (Rayetta Brown) Burnett and Chad James (Angie) Burnett; daughter, Gina Danielle (Tim) Dressler; grandchildren, Emily, Abby, Charly, Samuel and Grace Burnett, Ella, Logan and Henry Dressler. Funeral services for Ed will be held at 10:00 AM on Saturday, August 8, 2020 at Pierre Funeral Home. Burial will follow in Tupman Cemetery, where the Vanderburgh County Retired Veterans Memorial Club will conduct military rites. Friends may visit with the family from 3:00 until 7:00 PM on Friday and from 9:00 AM until service time on Saturday at Pierre Funeral Home, 2601 W. Franklin Street. The family would like to extend a special thank you to the doctors and nurses at Deaconess Gateway Hospital who worked so diligently to fight the Covid-19 virus with Ed. Nurse Vanessa, you are a special angel. In lieu of flowers, memorial contributions may be made to Riley Children’s Research Hospital, Spinal Muscular Atrophy (SMA) or to the Disabled American Veterans. Condolences may be made online at www.pierrefuneralhome.com.

The family of Edward O. Burnett created this Life Tributes page to make it easy to share your memories.

Send flowers to the Burnett family.