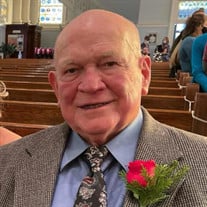 Francis H. “Frank” Will, 85, of Evansville, passed away Tuesday, February 23, 2021 at Deaconess Hospital Gateway Campus. Frank was born March 8, 1935 in Evansville to the late Andrew P. and Viola (Kissel) Will. He was a member of St. Joseph Catholic Church in Vanderburgh County; a graduate of Memorial High School, Evansville College and earned his Master’s Degree from Indiana University. Frank dedicated his life to Catholic education. He taught and coached at St. Benedict Grade School and Rex Mundi High School before finishing his career at Mater Dei High School. Frank had over 40 years of coaching experience, including 22 years as the head football coach at Mater Dei. He was the first coach at Mater Dei to lead the Wildcats to an undefeated regular season in 1984. His teams won seven sectional titles, four regional titles and one semi state. They were the class 2A state runner up in 1994. He was inducted into the Indiana Football Hall of Fame in 2001. His great joy however was in his family, his wife Betty, their four children and seven grandchildren. Surviving Frank are his wife of 54 years, Betty (Schapker) Will; two daughters, Beth (Brian) Hirshberg and Becky (Steve) Jung; two sons, Bryan (Angie) Will and Brad (Krista) Will; sisters, Jo Ann (Jack) Waltman and Loretta Kercher; brothers, Earl (Rosalee) Will and Martin (Irma) Will and seven grandchildren, Mallorie Will, Nick (Maddie) Will, Michael Jung, Gabe Jung, Ashley Jung, Kaley Will and Porter Will. In addition to his parents, Frank was preceded in death by three sisters, Teresa Will, Rita Camp and Dolores Will and by brothers, Kenneth Will, Brother Vincent P. Will, CSC, Andrew Will, Jerry Will, Aloysius “Butch” Will and Neil Will. There will be a Mass of Christian Burial held at 10:00 AM on Monday, March 1, 2021 at St. Joseph Catholic Church in Vanderburgh County, Rev. Eugene Schroeder officiating. Burial will follow in the St. Joseph Church Cemetery. Friends may visit with the family from 1:00 until 6:00 PM on Sunday at Pierre Funeral Home, 2601 W. Franklin Street. Anyone who attends will be required to wear and mask and social distance out of respect for others. Memorial contributions may be made to St. Joseph Catholic Church in Vanderburgh County, 6202 W. St. Joseph Road, Evansville, IN 47720 or to Mater Dei High School, 1300 Harmony Way, Evansville, IN 47720. Condolences may be made online at www.pierrefuneralhome.com.

The family of Francis H. Will created this Life Tributes page to make it easy to share your memories.