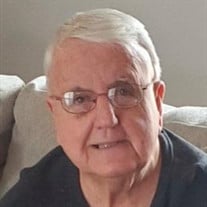 Frank M. Smith, 89, of Evansville, passed away Sunday, May 8, 2022 at the West River Health Campus. Frank was born December 18, 1932 in Henderson, KY to the late George and Josephine (Trimborn) Smith, the youngest of twelve children. He graduated from Holy Name High School in 1952 and served in the United States Navy from 1952 to 1956. Frank was a GMM3 and served on the USS Tingney and LSM(R). He served for a year and a half on each ship. He was stationed in Hong Kong and Hawaii and patrolled the Korean Peninsula. Frank sent his mother a set of china from Japan during a visit there. Frank had the honor of being part of Honor Flight of Southern Indiana EVV7 on October 22, 2017. When Frank came back stateside, he started work for Chrysler until company moved. He then went to work for Arkla/Dometic until 1988. In 1990, Frank started his “semi-retirement” job at Buehler’s on Main Street until finally fully retiring in 2012. In 1958, Frank and Tom Scheller went to Lamey’s Dance Hall where Frank met the love of his life, Jacqueline Major. Frank and Jackie married on September 16, 1961 at St. Benedict Cathedral and in November of that year officially became “westsiders” buying their first home in Western Terrace and joining Corpus Christi Church. Frank was involved at Corpus Christi and the Mater Dei Men’s Club for many years. He also coached Little League when his son played at Corpus Christi. Surviving Frank are a daughter, Pamela (Kenneth) Schaefer; son, Rodney Eric (Tiffany Foley) Smith; granddaughters, Tabitha, Brianna and Holly Schaefer and Lily Smith; sister, Helen (Smith) Martin-Tuebner; brother-in-law, Leland Lammle of Jacksonville, FL; sisters-in-law, Margaret (Schlachter) Smith of Henderson, KY and Patricia (Major) Poole of McKinney, TX. Frank is also survived by his longtime friend and “adopted” brother, Jon (Kathy) Black, along with his work family from Buehler’s on Main Street, many nieces and nephews. In addition to his parents, Frank was preceded in death by his wife of 41 years, Jacqueline (Major) Smith in 2002; by siblings, Sr. Josephine Smith, Mary Louise Mingus, George Smith, Thomas Smith, Catherine Spalding, Anna Theresa Smith, Charles Smith, Agnes Thurmond, William Smith and James Smith. There will be a Mass of Christian Burial held at 1:00 PM on Saturday, May 14, 2022, at Corpus Christi Catholic Church. Burial will follow in St. Joseph Cemetery. Friends may visit with the family from 2:00 until 7:00 PM on Friday at Pierre Funeral Home, 2601 W. Franklin Street and from 12:30 PM until service time on Saturday at Corpus Christi Church. In lieu of flowers, memorial contributions may be made to Honor Flight of Southern Indiana, P.O. Box 8234, Evansville, IN 47716 or to Corpus Christi Church, 5528 Hogue Road, Evansville, IN 47712. Condolences may be made online at www.pierrefuneralhome.com.

Frank M. Smith, 89, of Evansville, passed away Sunday, May 8, 2022 at the West River Health Campus. Frank was born December 18, 1932 in Henderson, KY to the late George and Josephine (Trimborn) Smith, the youngest of twelve children. He graduated... View Obituary & Service Information

The family of Frank M. Smith created this Life Tributes page to make it easy to share your memories.

Send flowers to the Smith family.