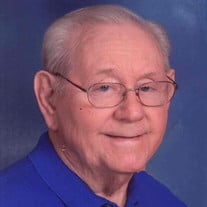 Harold W. Nix, 87, of Evansville, passed away Monday, April 11, 2022 at River Pointe Health Care. Harold was born June 22, 1934 in Posey County, IN to the late Walter and Louise (Krietenstein) Nix. He was a 1952 graduate of FJ Reitz High School. After graduation, he joined the Navy and was assigned to the USS WASP Aircraft Carrier. In 1963 he moved his family to Ft. Lauderdale, FL where he began his life career in the restaurant business, purchasing F & L Carryout which later became Harold's Fried Chicken. In 1970, Harold and Carolyn bought Bockelman's Restaurant on the west side of Evansville, and then later built Western Ribeye in 1975. With his son's, Dan and David, they opened Jacob's Pub in 1990. He was a member of the West Side Nut Club, the U.S. Power Squadron and a veteran of the United States Navy. Harold was also a member of St. Paul’s United Church of Christ in German Township. He enjoyed boating, sailing and was a pilot who loved to fly. He was, also, an avid fan of the St. Louis Cardinals, Indianapolis Colts, and IU Basketball. Surviving Harold are his wife of 68 years on July 17th, Carolyn (Reis) Nix; two sons, Daniel (Lee Ann) Nix and David (Cindy) Nix; one sister Evelyn Reisinger; four grandchildren, Michele Nix, Audrey (Tommy) Bush, Jason (Emmy) Nix and Krista (Morgan) Wilhite; three nephews, Randy Reisinger, Ray Sollman, and Brian Sollman and four great grandchildren. In addition to his parents, Harold was preceded in death by a sister, Marilyn Sollman and by a nephew, Steve Reisinger. Funeral services for Harold will be held at 10:00 AM on Saturday, April 16, 2022 at Memorial Park Cemetery Heritage Chapel, Rev. Terry Farmer officiating. Burial will follow in Memorial Park Cemetery. Friends may visit with the family from 3:00 until 7:00 PM on Friday, April 15, at Pierre Funeral Home, 2601 W. Franklin St. Evansville, IN and from 9:30 AM until service time on Saturday at Memorial Park Heritage Chapel. Memorial Contributions may be made to St. Paul’s United Church of Christ German Township, 8701 Big Cynthiana Road, Evansville, IN 47720. Condolences may be made online at www.pierrefuneralhome.com.

Harold W. Nix, 87, of Evansville, passed away Monday, April 11, 2022 at River Pointe Health Care. Harold was born June 22, 1934 in Posey County, IN to the late Walter and Louise (Krietenstein) Nix. He was a 1952 graduate of FJ Reitz High School.... View Obituary & Service Information

The family of Harold W. Nix created this Life Tributes page to make it easy to share your memories.

Send flowers to the Nix family.