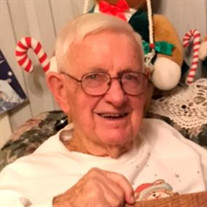 Jack Thomas Daily, 87, of Evansville, passed away at his home on Monday, March 29, 2021. Jack was born January 17, 1934 in Evansville to the late James, Sr. and Agnes (Riger) Daily. He was a veteran of the United States Navy, serving from 1953 to 1957 and had worked at Bucyrus Erie for 31 years before his retirement. Jack was a true outdoorsman; he very much loved to cut firewood, was an avid hunter and fisherman, enjoyed taking family vacations to Florida, where he would oyster with his brother and nephew, camping and gardening. He was an avid fan of the New Orleans Saints and the West Side Nut Club Fall Festival. He would eat his way down one side of the street and back the other. Jack also enjoyed making his famous peanut brittle, springer leigh and oatmeal raisin cookies each year at Christmas. He loved to tell stories and had a million of them. He also loved to watch his grandchildren’s sporting events and Reitz High School football. Surviving Jack are his wife of 62 years, Elizabeth Ann Daily; two daughters, Yvonne (Rick) Wahl and Rose Ann (Mark) Norman, both of Evansville; two sons, Danny Lee (Merry) Daily of Calvert City, KY and Thomas L. (Angela) Daily of Owensboro, KY; two sisters, Bonnie (Harvey) Juncker of Florida and Diana (Bob) Davis of Evansville; brother, Dwight (Barb) Daily of Florida; grandchildren, Christopher (Jamie) Wahl, Nicholas (Amanda) Wahl and Nathan (Kira) Wahl, Brandon (Joanie) Norman, Ashley (Jason) Majors, Marcus Daily, Danyele (Aaron) Story, Joshua (Kaylan) Daily, Christina Ramsey and Tori Smith; great grandchildren, Porter, Hartley and Lynnden Wahl and another great grandson due in May, Jansen, Kiera Belle and Landon Story, Kole Smith, Addison and Andrew Daily, Austin (Jamie) Daugherty, Summer and Kaylyn Bergwitz, Arah, Noah and Natalie Majors, as well as many nieces and nephews. In addition to his parents, Jack was preceded in death by a brother, James Daily, Jr. Funeral services for Jack will be held at 10:00 AM on Friday, April 2, 2021 at Pierre Funeral Home, Pastor Christopher Templeton officiating. Burial will follow in Tupman Cemetery. Friends may visit with the family from 3:00 until 7:00 PM on Thursday at Pierre Funeral Home, 2601 W. Franklin Street. Anyone who attends will be required to wear a mask. Condolences may be made online at www.pierrefuneralhome.com

Jack Thomas Daily, 87, of Evansville, passed away at his home on Monday, March 29, 2021. Jack was born January 17, 1934 in Evansville to the late James, Sr. and Agnes (Riger) Daily. He was a veteran of the United States Navy, serving from... View Obituary & Service Information

The family of Jack T. Daily created this Life Tributes page to make it easy to share your memories.

Jack Thomas Daily, 87, of Evansville, passed away at his home...

Send flowers to the Daily family.