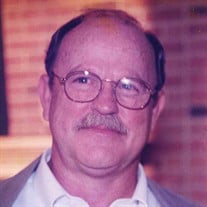 James William Calhoun, 77, passed away peacefully August 21, 2021 after a brief battle with cancer. Jim was born in Evansville, Indiana on February 10, 1944 to the late JC and Irene (Jones) Calhoun. He was the middle of three sons. After graduation from his beloved FJ Reitz High School, he worked at Anderson Box Company. In the late 60s, Jim and his young family, including a new daughter, Jamie, moved to North Carolina where he spent the next several decades. He loved the Carolinas and the hunting and fishing in the area, and Jim soon picked up the southern drawl of the locals which he kept the rest of his life. His passion for animals and the outdoors led him to a career at the Wilson, NC Health Department where he ran Animal Control. Jim returned to Evansville in 1996 where he reconnected with old friends and family. Karen Kern was one of those friends and a romance quickly blossomed. They married in 1998 and settled in Cadiz, KY where Jim ran Calhoun Disposal Company. He enjoyed driving the country roads of Kentucky waving at his customers and stopping for a quick chat along the way. Jim and Karen loved their life by the lake. Grandchildren expanded their family and the chance to watch them grow pulled them back to Evansville in 2007. Jim’s fondness of driving continued in his work in Evansville as he drove clients for Riverwalk Communities and delivered meals for SWIRCA. He delighted in hearing about the lives of the people who rode with him and visited, and he enjoyed telling his own stories of adventures as a younger man. He always cared for animals wherever he was – feeding the birds and squirrels in his yard. Through the years, a beloved pet was always by his side along with his newspaper and crossword puzzles. Jim was a true gentleman in his care for animals and the people he loved. He will be missed. Jim was preceded in death by his parents and his brother, Larry. He is survived by his loving wife of 23 years, Karen Calhoun, Evansville, IN, his daughter, Jamie Calhoun, Sandford, NC, and his brother, Steve (Sherrie), Nashville, IN; stepsons Ben (Marie) Wagner, Cliff (Sarah) Wagner of Evansville, IN, and Mark (Alisha) Wagner of Pagosa Springs, CO; grandchildren Spencer, Zachary, Grace and Sam Wagner, and Madeline and Preston Beck, all of Evansville, IN. He also leaves behind three cats, Smokey, Callie and Boots. The family is grateful to all who have helped through prayers and visits during this difficult time. They also extend their appreciation to the skilled and compassionate staff at the Linda E. White Hospice House. A Celebration of Life will be held in the future. In lieu of flowers, memorial gifts can be made to the Vanderburgh Humane Society, PO Box 6711, Evansville, IN 47719 https://www.vhslifesaver.org/donate#donate or to the Linda E. White Hospice House, 611 Harriet Street, Evansville, IN 47710, https://www.deaconess.com/For-You/Donors-and-Volunteers/Give-Now.

James William Calhoun, 77, passed away peacefully August 21, 2021 after a brief battle with cancer. Jim was born in Evansville, Indiana on February 10, 1944 to the late JC and Irene (Jones) Calhoun. He was the middle of three sons. After graduation... View Obituary & Service Information

The family of James William Calhoun created this Life Tributes page to make it easy to share your memories.

Send flowers to the Calhoun family.