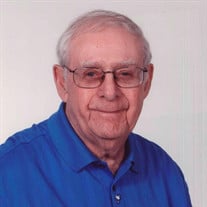 James W. Scheller, 94, of Evansville, passed away peacefully on Sunday, January 2, 2022 at his home surrounded by his loving family. Jim was born November 29, 1927 in Evansville to the late Joseph and Susie (Rich) Scheller. He was a graduate of FJ Reitz High School. Jim retired from General Foods as a supervisor after 35 years of service in May of 1986. He was a member of Corpus Christi Catholic Church for 36 years, where he served as a Eucharistic minister, member of the Men’s Club, sang in the church choir and was a member of the Finance Committee for three years. Later in life, Jim and Martha transferred their membership to Sacred Heart Catholic Church. Jim and Martha were active members of Sacred Heart and were awarded the Brute Award from the Diocese of Evansville for their service to the church. Jim also served in the United States Army, European Campaign 1st Infantry Division during World War II and was a life member of VFW Post 1114. Jim was also active in athletics, playing semi pro baseball for ten years. He played the last four years with St. Wendel in the Double II league, winning the league title one year. Later in life, Jim loved to play golf and has two holes in one. Jim was the biggest fan and supporter of his grandchildren’s sporting events and any activity they were involved in. You could find Jim in the stands of any basketball court, softball field or walking 18 holes of golf. He was so happy that he was able to watch his great grandchildren as they were growing up. He loved talking sports and academics with them and always encouraged them to do their very best. Faithful as he was, Jim prayed the rosary daily, even in the car. He instilled that faith in his family. He was a true role model for us all. Jim was a devoted husband, father, grandfather and great grandfather. Surviving are his wife of 68 years, Martha (Folz) Scheller; daughter and son-in-law, Sara and Ron Luigs of Wadesville; brother, John Scheller; granddaughters, Amy (Craig) Epley, Andrea (Sha-ki) Johnson, Angela (Larry) Harris and Alisha (Amber) Luigs and great grandchildren, Brennan, Ava, Elle, Savannah, Ayla, Preston and Jackson and many nieces and nephews. In addition to his parents, Jim was preceded in death brothers, William Scheller, Joseph Scheller, Delano “Louie” Scheller and Harold “Chub” Scheller. There will be a Mass of Christian Burial held at 11:00 AM on Wednesday, January 5, 2022 at Sacred Heart Catholic Church, Rev. John Brosmer officiating. Entombment will follow in St. Joseph Catholic Cemetery, where the Vanderburgh County Retired Veterans Memorial Club will conduct military rites. Friends may visit with the family from 9:30 AM until service time on Wednesday at Sacred Heart Church, 2701 W. Franklin Street, Evansville, IN 47712. Memorial contributions may be made to the Sisters of St. Benedict, 802 E. 10th Street, Ferdinand, IN 47532 or to St. Boniface Catholic Church, 1600 Glendale Ave, Evansville, IN 47712. Condolences may be made online at www.pierrefuneralhome.com.

James W. Scheller, 94, of Evansville, passed away peacefully on Sunday, January 2, 2022 at his home surrounded by his loving family. Jim was born November 29, 1927 in Evansville to the late Joseph and Susie (Rich) Scheller. He was a graduate... View Obituary & Service Information

The family of James W. Scheller created this Life Tributes page to make it easy to share your memories.

Send flowers to the Scheller family.