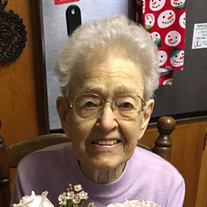 Jane Tong, 100, of Evansville, passed away at the Heritage Center on Thursday, October 22, 2020. Jane was born February 20, 1920 in Owensboro, KY to the late Harry and Stella (Walters) Heisler. She was a long-time member of Howell United Methodist Church, where she volunteered her time and served on various committees and fundraisers; she also volunteered at the Simpson United Methodist Food Pantry. She was also a member of the Order of the Eastern Star and a life-time member of the VFW Post 1114 Ladies Auxiliary. Jane was active working the election polls for over 20 years on the Westside. During WWII, Jane worked at Bucyrus Erie as a welder. Later Jane worked in the meat department at Spalding’s IGA before returning to Bucyrus Erie where she retired with 25 years of service. Surviving Jane are a daughter, Pat Turpin (Randy); grandchildren, Debbie Smith (Tom), Tommy Wright (Amy), Susan McCamish (Dan), Matt Turpin (Amy) and Tina Paulter (Evan); thirteen great grandchildren, six great-great grandchildren, two brothers, Bob Heisler and Gene Heisler and many nieces and nephews. In addition to her parents, Jane was preceded in death by her husband of 66 years Fred Tong in 2005 and by three sisters, Nan Davis, Henrietta Harrison and Libby Ayer. Funeral services for Jane will be held at 10:00 AM on Tuesday, October 27, 2020 at Pierre Funeral Home, Rev. Mike Jones officiating. Burial will follow in Memorial Park Cemetery. Friends may visit with the family from 3:00 until 7:00 PM on Monday at Pierre Funeral Home, 2601 W. Franklin Street. Memorial contributions may be made to Howell United Methodist Church. The family would like to extend a special thank you to MSA Hospice for all their compassionate care. Condolences may be made online at www.pierrefuneralhome.com.

Jane Tong, 100, of Evansville, passed away at the Heritage Center on Thursday, October 22, 2020. Jane was born February 20, 1920 in Owensboro, KY to the late Harry and Stella (Walters) Heisler. She was a long-time member of Howell United Methodist... View Obituary & Service Information

The family of Jane Tong created this Life Tributes page to make it easy to share your memories.

Jane Tong, 100, of Evansville, passed away at the Heritage Center...

Send flowers to the Tong family.