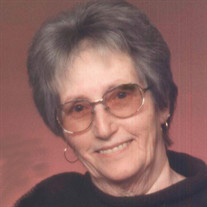 Janet L. Bray, 85, of Evansville, passed away Wednesday, December 1, 2021. Janet was born April 22, 1936 in Evansville to the late Mary (Gaskin) Satterfield and Charles Chandler. She attended Centennial Elementary School and Central High School. Early in life, Janet worked for General Tire, where she made several lifelong friends. She also worked for Shane Uniform Company and later in life, worked at The Print Shop making deliveries to many local businesses. She and her late husband, Norman enjoyed traveling and visited all of the contiguous United States. Janet was a lifetime member of the Riverbend Association, where she worked many years preparing the mailing of their newsletters. She was also a member of SWIRCA. Surviving Janet are her daughter, Dawn (David) Rideout of Mt. Vernon; son, Mark (Ginamarie) Bray of Hayden, AL; sister, Peggy Barrick of Flint Hill, MO; grandchildren, Rodney and Kristopher Rideout of Evansville, Alexis Bray of San Diego, CA and Taylor Rodas of New Mexico and a great granddaughter, Kaylee Rideout. In addition to her parents, Janet was preceded in death by her husband of 67 years, Norman Bray in 2020 and by a sister, Mary Sue Smith. Friends may visit with the family from 3:00 until 7:00 PM on Tuesday, December 7, 2021 at Pierre Funeral Home, 2601 W. Franklin Street. Burial will take place in Memorial Park Cemetery next to her late husband, Norman. The family would like to extend a special thank you to the staffs of Deaconess Midtown Hospital units 2500 and 5200. Janet was an animal lover and, in that spirit, in lieu of flowers, memorial contributions may be made to the Vanderburgh County Humane Society, 400 Milner Industrial Drive, Evansville, IN 47710. Condolences may be made online at www.pierrefuneralhome.com.

The family of Janet L. Bray created this Life Tributes page to make it easy to share your memories.

Send flowers to the Bray family.