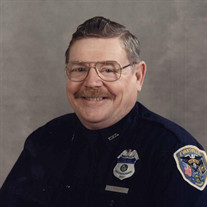 Jerome “Jerry” Francis Preske, 85, of Evansville, passed away Tuesday, April 7, 2020 at his home. Jerome was born May 4, 1934 in Evansville to the late Paul Louis and Cornelia (Stocker) Preske. He served his God and his country. Jerry served with the March for Jesus; helping and organizing for the march. He was as a boy scout leader and in the Order of the Arrow. Jerry was also a veteran of the United States Marine Corps. He served in Huntsville, AL with NASA. He later worked for Bristol Myers before joining the Evansville Police Department and serving for 24 years before retiring. He enjoyed building model airplanes. Jerry will always be remembered for his contagious laugh that shook his entire body; his sense of humor and love for people. Surviving are his wife of 37 years, Barbara (Clemons) Preske; a daughter, Angie (Tim) O’Leary of Sanford, FL; two sons, Ben (Nan) Preske of Newburgh and Dan Preske of Evansville; one stepson, Sam (Kimi) Morgan of Evansville; two brothers, Otto (JoAnn) Preske of Gatlinburg, TN and Thomas Preske of Evansville; eight grandchildren, Dan (Anna) Preske, Samantha Preske, Katie O’Leary, Max O’Leary, Brittany (Patrick) Lewis, Emily Preske Joe (Christie) Grace and Jason (Summer) Grace; six great grandchildren, Jade, Sydney, James, Elli, Isaac and Colin and his loving dog, Tiger. In addition to his parents, Jerry was preceded in death by two great grandchildren, Nathan Grace and Abi Grace. Due to the current Coronavirus pandemic, visitation and funeral services will be private. Burial will take place in St. Joseph Catholic Cemetery. Pierre Funeral Home is assisting with arrangements. Condolences may be made online at www.pierrefuneralhome.com.

The family of Jerome F. Preske created this Life Tributes page to make it easy to share your memories.

Send flowers to the Preske family.