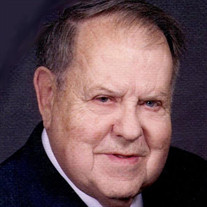 Jimmy E. Ruff, 88, of Evansville, went to be with the Lord on Friday, February 28, 2020. He was born September 7th, 1931 to Marie and Henry Ruff. Jim graduated from the old Central High School in 1949, where he learned about printing. He later worked at Tri-State Printing Co. Inc, eventually becoming the owner. He served two years in the Army, stationed in Germany during the Korean War. He was a member at Trinity Lutheran Church of Evansville where he was very active and served in many roles before transferring to Trinity Lutheran Darmstadt. He was a former member of Downtown Civitan Club. He was a 45-year member of the West Side Nut Club. He enjoyed working the stage area at the talent shows during the festival. Jim enjoyed bowling back in the day. He loved watching sports, especially the St. Louis Cardinals. He was a season ticket holder for years at the University of Evansville Aces. Jim is survived by his wife of 62 years, Vivian (Helming Ruff); two sons, Tim Ruff and Tom (Marcy) Ruff, and his daughter, Barb Ruff; two grandchildren, Brittany Ruff and Emily (David) Jameson; and three great grandchildren. He was proceeded in death by his sister, Ethel Wilson, and two brothers, Raymond Ruff and Donald Ruff. Visitation will be from 3 to 7PM on Monday, March 2, 2020 at Pierre Funeral Home, 2601 W. Franklin Street, Evansville, IN 47712. Friends may also visit with the family from 9:30 until service time the day of the funeral. Funeral services will begin at 10AM on Tuesday, March 3, 2020 at the funeral home with Pastor Stan Temme from Trinity Darmstadt officiating. Burial will follow at the Lutheran Cemetery on St. Joseph Ave. where the Retired Veterans Memorial Club will conduct military rites. Memorial contributions may be made to Trinity Darmstadt, 1401 West Boonville-New Harmony Rd. Evansville, IN 47725. Condolences may be made online at www.pierrefuneralhome.com.

Jimmy E. Ruff, 88, of Evansville, went to be with the Lord on Friday, February 28, 2020. He was born September 7th, 1931 to Marie and Henry Ruff. Jim graduated from the old Central High School in 1949, where he learned about printing. He... View Obituary & Service Information

The family of Jimmy E Ruff created this Life Tributes page to make it easy to share your memories.

Send flowers to the Ruff family.