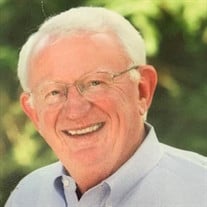 John Hayden Emhuff passed away peacefully on February 10, 2022 at the home of his daughter, Susy Hall, in Evansville, Indiana. John was born on March 9, 1936 in Seymour, Indiana to William and Thelma (Hayden) Emhuff. John attended Indiana University, where he earned bachelors, masters, and doctoral degrees. His career as an educator spanned 41 years, beginning with teaching roles in California and Indiana, followed by a principalship at Blackford County High School in Indiana. In 1970, John joined ISUE (now the University of Southern Indiana) as a professor of education, Dean of Students, and Director of Alumni affairs. In 1975, John joined the Metropolitan School District of Mt. Vernon. After serving as the principal of Hedges Central Elementary School, he held the position of Assistant Superintendent of Instruction until his retirement in 2000. John’s tenure with the Mt. Vernon school district culminated with the creation of the Dr. John H. Emhuff Alternative School, now known as the Opportunity Center. In honor of John’s service, the Indiana School Boards Association conferred the Lorin A. Burt Award, recognizing overall excellence in contributions to Indiana education. His most cherished honor, though, was being named Teacher of the Year during the early years of his career. Following retirement from the field of education, John began a second career, working in the Posey County Circuit Court of Judge James Redwine and assisting at the Austin Funeral Home. Throughout his life in Mt. Vernon, John broadly served the community as an active member of the Kiwanis International Service Club, as a board member for the Posey County Red Cross, and as a board member for the Community Action Program of Evansville. In recognition of his community and career service, John was named a recipient of the Sagamore of the Wabash award, the highest honor bestowed by the Governor of Indiana. John attended the First United Methodist Church in Mt. Vernon. He volunteered as a statistician for the men’s basketball team at the University of Southern Indiana, he officiated high school football, and he held season tickets for his beloved Indiana University football team. John enjoyed fishing, traveling, sharing the bounty of his vegetable garden, and playing hearts at the Dogtown tavern. In his later years, he loved shopping at Schnucks, meeting for coffee at McDonalds and Starbucks, and playing poker at the Aztar riverboat. More than anything, John enjoyed spending time with his grandchildren, treating them to movies, to tailgating at IU football games, and to his world-famous chocolate milk shakes. John showered his family and friends with boundless love. He was devoted to Beverly, his wife of 65 years. He was a champion for the hopes of children, and he was a respected mentor to colleagues who shared his passion for developing kids. John nurtured enduring friendships, and his warmth and unparalleled generosity extended to everyone he knew. John approached every interaction with humility, with tolerance, and with an abundance of kindness. He touched the lives of so many, and within them, John’s legacy will live. John is survived by wife Beverly (Knott), children Betsy Emhuff, Erich Emhuff (Bridgett), Susy Hall (Kirk), Janey Albin, Krista Whipple, and Katey Smith. Grandchildren Hannah, Grace, Shaun, Dylan, Austin, Anderson, Colin, Meghan, and Aidan. Great grandchildren Justice, Bishop, Kash, Cy, Oakleigh, Olivia, Amarah, Amaya, and Lavada. A private service will be held at Pierre Funeral Home in Evansville, Indiana on February 19. In lieu of flowers, donations may be made to Wildcats Remembered, PO Box 120, Mt. Vernon, Indiana, 47620.

John Hayden Emhuff passed away peacefully on February 10, 2022 at the home of his daughter, Susy Hall, in Evansville, Indiana. John was born on March 9, 1936 in Seymour, Indiana to William and Thelma (Hayden) Emhuff. John attended Indiana... View Obituary & Service Information

The family of John H. Emhuff created this Life Tributes page to make it easy to share your memories.

Send flowers to the Emhuff family.