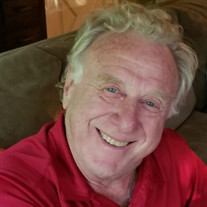 John W. McNaughton, 78, beloved son, husband, father, and grandfather passed away Friday, March 11, 2022. John graduated from Ball State University and then worked as a designer for General Motors. Returning to Ball State, he obtained a MA, then earned his MFA at Bowling Green State University. In 1970, he began his career with Indiana State University Evansville (now USI). He worked diligently with fellow faculty expanding the art department into the state-of-the-art program it is today. Several of his students achieved great success which brought him tremendous pride. He was listed in Who’s Who of American Artists and his work has been featured in 30 publications. John exhibited in art galleries from New York to Los Angeles and is in the permanent collections of the White House, the Smithsonian, USI, Evansville Museum of Arts, History and Science, and the David Owsley Museum of Art at Ball State University among many others. After thirty-five years as a professor of art at USI, John retired in 2006. Then he devoted the rest of his career to creating sculpture in his personal studio. Although retired, he continued to be a prolific artist producing some of his most profound sculptures. John’s life exemplified Madeline Bridges writing, “Give to the world the best you have, and the best will come back to you.” He was fun loving, adventurous, compassionate, an avid golfer, enjoyed spending time with family and friends, and had an infectious laugh. He is survived by his wife of 56 years, Kathie; daughters, Carole McNaughton and Jill Nolan, their spouses Tonya Lamer and Pat Nolan; grandchildren Kylie Nolan and Erin Nolan. Visitation will be held Saturday, March 19 from 2:00-5:00 p.m. at Pierre Funeral Home, 2601 W. Franklin Street, Evansville, IN 47712. Memorial contributions can be made to the USI Art Department (reference John W. McNaughton Award for Excellence in Woodworking). Condolences may be made online at www.pierrefuneralhome.com.

The family of John William McNaughton created this Life Tributes page to make it easy to share your memories.

Send flowers to the McNaughton family.