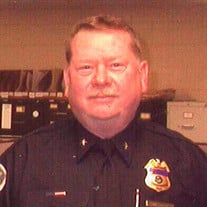 Joseph Michael “Mike” Reed, 74, of Evansville, passed away Thursday, December 9, 2021 at Deaconess Hospital Midtown Campus. Joe was born December 22, 1946 in Paducah, KY to the late David and Josephine (Cashon) Reed. He served on the Evansville Police Department for 36 years before retiring as Deputy Chief in 2007. He was proud to be a patrol officer and considered that to be the backbone of the department. Joe was on the EPD Pistol Team; a member of FOP Lodge #73 and had protected two presidents during their visits to Evansville. He also trained at the FBI Academy at Quantico. He was an avid deer hunter and enjoyed collecting coins. Surviving are his wife of 52 years, Jan (Talarzyk) Reed; daughters, Amy (Gary) Snodgrass and Megan (Justin) Parker; one son, Chris (Shawna) Reed; two sisters, Betty (Mike Jones) Reed and Phyllis Lahr; brother, Richard (Jennifer) Reed; grandchildren, Madison Snodgrass, Riley (Savannah) Snodgrass, Macy Snodgrass, Rhett Snodgrass, River Snodgrass, Merritt Snodgrass, Ryder Snodgrass, Harrison Parker, Hudson Parker and Emma Reed; nieces and nephews. Also surviving Joe is his friend and former EPD partner, Wayne Thompson; friend, Frank Schneider and the “Lake Boys”. In addition to his parents, Joe was preceded in death by a granddaughter, Quinn Parker and by a brother, Tim Reed. There will be a memorial service held at 5:00 PM on Sunday, December 12, 2021 at Pierre Funeral Home. Friends may visit with the family from 1:00 until 5:00 PM on Sunday at Pierre Funeral Home, 2601 W. Franklin Street. Memorial contributions may be made to the Deaconess Foundation, 600 Mary Street, Evansville, IN 47747 for the benefit of the Women’s Hospital Bereavement. Condolences may be made online at www.pierrefuneralhome.com.

The family of Joseph Michael Reed created this Life Tributes page to make it easy to share your memories.

Send flowers to the Reed family.