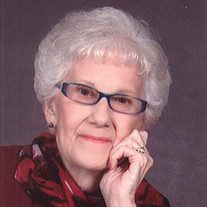 Josephine A. “JoAnn” Peitzmeier, 87, of Evansville, passed away on February 6, 2022 at her home. JoAnn was preceded in death by her husband of 51 years, Andrew E. Peitzmeier on September 20, 2004. She and Andy were wed on December 30, 1952 at Sacred Heart Catholic Church in Warsaw, IL. Since the age of 5, JoAnn was either working, helping others through volunteering or just making friends. The grocery business was part of her life from a young age as her grandfather owned and operated Filz Finer Foods in Warsaw. She and Andy owned and operated The Country Food Fair in Warsaw for many years. JoAnn taught at Rockford School where there were eight grades in two rooms and earned her Elementary Education degree from Carthage College in 1962. She went on to teach in the Warsaw school system until her retirement in 1992. She taught Title I for most of that time. She was active on the Warsaw Public Library Board and helped in the building of the new library. After retiring, JoAnn volunteered for Birthright and Meals on Wheels. A life-long Catholic; she was a parishioner at Sacred Heart Church in Warsaw before moving to Evansville in 2006 and becoming a member of Holy Redeemer. Retiring from teaching at an early age left JoAnn time to dote on her grandchildren which she and they both enjoyed. She never seemed to meet a stranger and loved cutting up and spending time with friends. She was a world traveler; having visited Europe, South Africa, Australia, New Zealand, China and most of the United States. One of her most treasured trips was a transcontinental train trip across Canada with her sister and sister-in-law. The trip was topped off with a New England cruise. She enjoyed biking, walking, and working in her yard. She loved culture, music, arts, plays, movies and musicals, which she passed on to her children and grandchildren. Surviving JoAnn are her son, Mark A. (Flora) Peitzmeier; daughter, Michelle (Thomas) Ramacciotti; grandchildren, Michael (Sarah Bradley) Peitzmeier, Sarah (John Silberholz) Peitzmeier, Brianna (Dylan) Deputy and Victoria Ramacciotti and great grandchildren, Auden and Eleanor Silberholz and Andrew Peitzmeier Bradley. Also surviving are her sister, Janet (John) Rater and sisters-in-law, Deanna Ewers and Anne Peitzmeier, many nieces and nephews. In addition to her husband Andrew, JoAnn was preceded in death by her parents, Joseph and Charlotte Ewers; by a brother, Michael Ewers and a daughter, Melissa. There will be a Memorial Mass held at 1:00 PM on Saturday, March 5, 2022 at Holy Redeemer Catholic Church, Rev. Jason Gries officiating. Friends may visit with the family from 11:00 AM until service time on Saturday at Holy Redeemer Church. Anyone who attends services will be required to wear a mask. Graveside services will take place at 10:00 AM on Monday, March 7, 2022 in Oakland Cemetery in Warsaw, IL. In lieu of flowers, contributions may be made in JoAnn’s memory to Catholic Charities of Evansville or to St. Jude Children’s Hospital in Memphis, TN. Condolences may be made online at www.pierrefuneralhome.com.

The family of Josephine Ann Peitzmeier created this Life Tributes page to make it easy to share your memories.

Josephine A. “JoAnn” Peitzmeier, 87, of Evansville, passed away...

Send flowers to the Peitzmeier family.