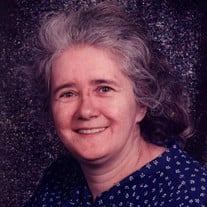 Joyce Imogene Rigney, 84, of Evansville, passed away on Tuesday, January 4, 2022 at the Golden Living Center Brentwood. Joyce was born October 17, 1937 in Whitley County, KY to the late Jarvie J. and Nola Marie Lawson. She was employed at the... View Obituary & Service Information

The family of Joyce Imogene Rigney created this Life Tributes page to make it easy to share your memories.

Joyce Imogene Rigney, 84, of Evansville, passed away on Tuesday,...

Send flowers to the Rigney family.