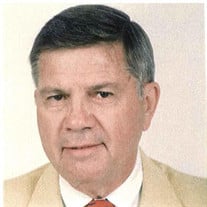 Larry William Arp, 82, of Evansville, Indiana passed away Monday, June 29, 2020 at The Linda E. White Hospice House. He was born in Waterloo, Iowa on August 2, 1937 as the son of William Herman Arp and Marlys Dahms Arp. He is survived by his wife, Linda Mary Kilzer Arp, whom he married in Walthill, Nebraska on December 27, 1964. While growing up on a farm in Iowa, he graduated from Toledo High School in 1955 and went on earn his Bachelor’s degree in Business Education from the University of Northern Iowa in 1960. Later in his career, he would earn his Master’s degree in Business Education from Adams State College in 1968 and his Ed. D. in Curriculum Development from Utah State University in 1974. He also attended Ohio University, the University of Nevada Las Vegas, and the University of Evansville for additional coursework. Arriving in Evansville in 1972, Dr. Arp served for 28 years in the School of Business at the University of Southern Indiana. While at USI he served as Chair of the Information Systems and Business Education Department from 1991-2000. He also was Director of Athletics from 1987-1991. Dr. Arp also published several articles in professional journals during his tenure and was active in professional organizations. Dr. Arp started his teaching career in 1960 as a business teacher and volunteer football coach at the Cumberland and Massena High School in Massena, Iowa. In 1962 he moved to Fort Morgan, Colorado to continue his teaching and coaching career. While in Fort Morgan he met his wife Linda who was an elementary teacher. While in Fort Morgan he coached freshman and junior varsity football. In 1966 his football team was the second unbeaten JV team in school history. In 1968, he and his wife Linda moved to Las Vegas, Nevada where he taught at Clark High School and served as varsity line coach. In 1971, he left Clark High School to pursue his doctorate at Utah State University. Before leaving he helped the football team become 1971 State Champion. In 1972, he left Las Vegas for Evansville, Indiana to begin his collegiate teaching career and Indiana State University Evansville, now USI. Dr. Arp was a member of several professional organizations including Phi Delta Kappa, National Business Education Association, Delta Pi Epsilon, the Indiana Business Education Association, and the Indiana Career and Technical Education Association. In 1999 he was named the Outstanding Business Educator by the Indiana Business Education Association and was recognized for his Contributions to Business Education by the North Central Business Education Association. Dr. Arp was an avid golfer, who loved reading about history and watching the spectator sports of football and basketball. Contributions may be made to the University of Southern Indiana Foundation. Due to Covid-19, there will be no public gathering or service at this time. Burial will take place in Tupman Cemetery. Pierre Funeral Home is assisting with arrangements. Condolences may be made online at www.pierrefuneralhome.com.

Larry William Arp, 82, of Evansville, Indiana passed away Monday, June 29, 2020 at The Linda E. White Hospice House. He was born in Waterloo, Iowa on August 2, 1937 as the son of William Herman Arp and Marlys Dahms Arp. He is survived by his... View Obituary & Service Information

The family of Dr. Larry W. Arp created this Life Tributes page to make it easy to share your memories.

Send flowers to the Arp family.