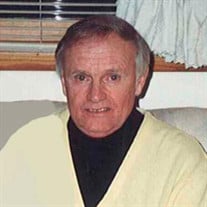 Larry George Hoefling, 75, of Evansville, passed away peacefully on Tuesday, January 12, 2021 at Deaconess Hospital Gateway Campus with his family by his side. Larry was born February 12, 1945 in Evansville to the late Earl and Mildred (Steinkuhl) Hoefling. He was the oldest of six children. Family, his faith and close friendships meant everything to him. He had a knack for making and keeping close friendships. Some of his best and longest friendships came from those of his classmates at Mater Dei High School where Larry played left halfback on the football team. Larry was a patriotic man who loved his country. After graduating from Mater Dei in 1963, Larry enlisted in the United States Navy. After two years, he transitioned into the Marine Corps as a Medical Corpsman helping care for the injured soldiers in the Vietnam War. After Larry’s service time ended, he returned to his home in Indiana to work for the Indiana Commerce Department in the tourism division. Part of Larry’s duties included acting as security detail for Mayor Lloyd. He later worked for the Evansville Fire Department. He bravely served the community for 27 years before retiring. Larry’s greatest joy in life was his role as a father to his only daughter, Kristin. He delighted in making memories with her on the family farm, fishing at the lake and playing softball. Larry was an avid sports fan and a fan of Mater Dei, Notre Dame and the St. Louis Cardinals. Surviving Larry are his daughter, Kristen Hoefling; sisters, Dianne (Gary) Wunderlich and Karen (Wayne) Breunig; brother-in-law, Gary Schmitt; aunt, Jan Steinkuhl, many beloved cousins and cherished nieces and nephews. In addition to his parents, Larry was preceded in death by brothers, Mark Hoefling, Kenny “Hoss” Hoefling and by a sister, Kathy Schmitt. Due to the pandemic, visitation and the Mass of Christian Burial at St. Joseph Church will be private. Burial will take place in St. Joseph Church Cemetery. The family would like to extend a special thank you to the nurses and staff of Deaconess Hospital who helped to make his transition easier during this difficult time. We are immensely grateful for their support and kindness. Also, thank you to Larry’s “other” family at Cypress Grove Rehabilitation Center where he lived and was given an amazing second home by their caring staff. In lieu of flowers, memorial contributions may be made to St. Joseph Catholic Church, 6202 W. St. Joseph Road, Evansville, IN 47720 or to the Mater Dei Friends and Alumni Association, 1300 Harmony Way, Evansville, IN 47720. Condolences may be made online at www.pierrefuneralhome.com

Larry George Hoefling, 75, of Evansville, passed away peacefully on Tuesday, January 12, 2021 at Deaconess Hospital Gateway Campus with his family by his side. Larry was born February 12, 1945 in Evansville to the late Earl and Mildred (Steinkuhl)... View Obituary & Service Information

The family of Larry G. Hoefling created this Life Tributes page to make it easy to share your memories.

Send flowers to the Hoefling family.