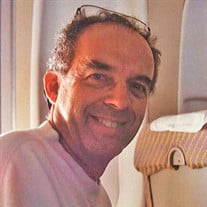 Larry Kent Quirey passed away peacefully at the Linda White Hospice House on January 14th, 2022, at the age of 80, following a long illness. Kent is survived by Marga, his loving wife of 28 years. He was affectionately known as "Opi" by his immediate family. Other surviving family members include son Robert Quirey, M.D. (Becky) granddaughter Lilly of Indianapolis, step daughter Germaine Drummond (Ken), granddaughter Arianna of Dade City, Florida, stepson Harris Howerton (Bridgett) grandson Isaac and granddaughter Claire of Evansville and stepdaughter Sarah Porter (Tye) of Evansville. Kent was a lifelong resident of Evansville, born October 11, 1941. He grew up on the near east side, the only son of Chester and Selma Quirey on Mulberry Street, where they operated a popular lamp and shade and interior decor shop out of their home. He was a 1959 graduate of North High School, gravitating to the vocational trade school there. After serving as an apprentice tool and die maker, he started his own successful business, Quirey Quality Engineering. Kent had a reputation as a gifted blueprint reader and industrial model maker. As the age of computer aided drafting came to be, he retooled his business to a new successful phase, making aftermarket Chrysler Mopar and John Deere parts as a wholesaler to car restoration parts dealers. He retired from the business in 2013. In his line of work, Kent was an expert craftsman, who could make or repair just about anything made of wood, metal or plastic. He always had an interest in cars, and early on was a competitive go kart racer and built and made parts for Swoopster karts for LMC Midget Motors in the early 60s. In 2016, Kent was featured in a story in Vroom magazine, chronicling the early karting scene in Evansville. He lovingly restored a 1931 Ford Model A phaeton and an Austin Healey 3000 Mk III among others to their original pristine beauty. He had a vintage Land Cruiser and enjoyed mudding with friends in Lynnville. He was also an avid boater for much of his life, boating on the Ohio, Lake Barkley and later at Green Turtle Bay in Kentucky where he and his wife Marga entertained many good friends. He and Marga had a wonderful life together and maintained a second residence in Dunedin, Florida, where Kent loved sitting on the porch or on the beach taking in the ocean scenery. He and Marga enjoyed traveling to her homeland in Germany spending time with family and friends there. Many thanks go out to the wonderful caregivers that gave Kent comfort during his prolonged illness, including the Visiting Care Plus caregivers, who helped so much over the last several years. Also, a special thanks to the Deaconess Hospice nurses and Linda White Hospice House nurses and staff. Dr. Kenneth Combs provided a constant presence throughout Kent's later years as a warm and caring physician. Friends may gather with the family from 2:00 until 4:00 PM on Saturday, March 26, 2022 at Pierre Funeral Home, 2601 W. Franklin Street, where there will be a memorial service held at 4:00 PM. Kent was a lover of furry friends, with cats and dogs always as members of the family over the years, and donations can be made in his name to the Vanderburgh Humane Society https://www.vhslifesaver.org/ways-to-donate/make-a-giftor or the Lewy Body Dementia Association https://www.lbda.org/donate. A celebration of life will be held at a later date. Condolences may be made online at www.pierrefuneralhome.com

Larry Kent Quirey passed away peacefully at the Linda White Hospice House on January 14th, 2022, at the age of 80, following a long illness. Kent is survived by Marga, his loving wife of 28 years. He was affectionately known as "Opi" by his... View Obituary & Service Information

The family of Larry Kent Quirey created this Life Tributes page to make it easy to share your memories.

Send flowers to the Quirey family.