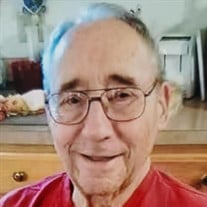 Marvin Frank Goedde passed away September 22 at the age of 87. He was born in Snake Run, IN, and raised in Haubstadt. Marvin is survived by his wife of 65 years, Annette (nee Wannemuehler), and his eight children, Brenda (Tim) Born, Deb (Mark) Garvey, Steve Goedde, Mike (Soozie) Goedde, Don (Ginny) Goedde, Kathy (Vince) Boots, Julie (Mike) Sellers, and Chris (Leslie) Goedde. He also leaves behind four brothers, Urban (the late Doris), Joe (Janith), his twin Darwin (Jeanette), and Andy (Marcia), and one sister, Loretta (Jerry) Schmitt. He has 24 grandchildren and 24 great-grandchildren. Marvin was preceded in death by his father, Andrew, his mother, Marie, his step-mother, Frieda, and his father- and mother-in-law, Ben and Rose. Marvin was a man of faith and dedication to family. He was very proud of his years in the Knights of Columbus and the Knights of St. John, for which he was named Knight of the Year in 1978. He was a longtime parishioner and choir member at Sacred Heart Catholic Church, and he and Annette were awarded the Brute Award in recognition of their Christian stewardship. His children and grandchildren were his joy, as were rooting for the Mater Dei Wildcats (especially during the many years he and Annette ran the concession stand), playing cards, gardening, and golfing. He was also a regular blood donor, tallying to 18+ gallons over the years. Marvin worked 13 years for Bristol-Myers and retired from there, prior to which he worked at Chrysler and as a route salesman for various bread and cake distributors. After retirement, he worked part-time for Berry Plastics. Marvin fought hard against Parkinson’s disease for over 20 years. His family is grateful to the wonderful instructors and co-boxers at Rock Steady Boxing, and to his doctors, his caregivers Megan, LeAnn, and Home Instead, his Heritage Hospice team, and his children and their spouses for their dedicated care. Visitation will be held on Sunday, September 26, 2021, from 2:00 PM until 7:00 PM at Pierre Funeral Home, 2601 W. Franklin Street. There will be a memorial service held at 2:00 PM Sunday at the funeral home. A Mass of Christian Burial will take place at Sacred Heart Catholic Church, 2701 W. Franklin St., on Monday, September 27, 2021, at 10:00 AM, Rev. John Brosmer officiating. There will be visitation in the church from 9:30 AM until service time. Entombment in St. Joseph Cemetery will follow Mass. Facial coverings are requested for all guests in attendance. In lieu of flowers, donations are suggested to Rock Steady Boxing at https://www.rocksteadyboxing.org/donate/ or 7440 N. Shadeland Ave., Indianapolis, IN 46250, or to Sacred Heart Catholic Church, ℅ St. Boniface Parish, 1626 Glendale Ave., Evansville, IN 47712. Condolences may be made online at www.pierrefuneralhome.com.

Marvin Frank Goedde passed away September 22 at the age of 87. He was born in Snake Run, IN, and raised in Haubstadt. Marvin is survived by his wife of 65 years, Annette (nee Wannemuehler), and his eight children, Brenda (Tim) Born, Deb... View Obituary & Service Information

The family of Marvin F. Goedde created this Life Tributes page to make it easy to share your memories.

Marvin Frank Goedde passed away September 22 at the age of 87....

Send flowers to the Goedde family.