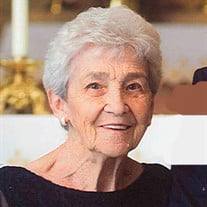 Mary Jane Tenbarge, 95, a lifelong Indiana resident of Haubstadt and Poseyville – passed away at her home in the early hours of Memorial Day, May 31, 2021. She was born the daughter of Adam and Tillie (Elpers) Schmitt of Poseyville on Oct. 16, l925. Mary Jane devoted her rich, long life to her faith, her family including ten children, their spouses, grandchildren, great-grandchildren and her friends. She enjoyed giving back to the Haubstadt community and the Catholic Church. To the many whose days were made brighter by her love and friendship, Mary Jane will be remembered for her generous nature and positive outlook. She developed a can-do spirit in taking on challenges beginning at a young age. As a first grader, she began school by speaking no English, only German. Mary Jane would marry Wilfred Tenbarge in l948, following his return from distinguished World War II military service. On March 31, they began their journey to own and operate a family grain and dairy farm. Mary Jane took joy in simple pleasures: tending her flowers and garden, clabber card games, and Saturday night dancing to polkas and waltzes. In recent years, Mary Jane enjoyed spending time with grandchildren and great-grandchildren, supporting their activities, and spoiling them with her delicious cinnamon rolls, caramel corn, red velvet cake, and homemade ice cream. Through the years, numerous priests at Sts. Peter and Paul have also been the beneficiary of Mary Jane’s cooking and baking skills. Mary Jane’s love of quilting can be seen in the many quilts she made for her grandchildren and great-grandchildren as well as those quilted by the Labor of Love Ladies for the Sts. Peter and Paul Die Kirche Auktion. While a parishioner at Sts. Peter and Paul, Mary Jane was active in the Daughters of Isabella and the Parish Altar Society. She and Wilfred were selected for lifetime membership in the Catholic Diocese of Evansville’s Brute Society. Mary Jane is survived by her children and spouses: William Tenbarge and Don (Elaine) Tenbarge, both of Haubstadt; Theresa (David) Vick of Evansville, IN; John Tenbarge, Fred (Jonelle) Tenbarge, Michael Tenbarge, all of Haubstadt; Ann (John) Beuligmann of Poseyville, IN; Mark (Susan) Tenbarge of Haubstadt; Mary Ellen (James) Duke of Columbus, IN; and Bernie (Lisa) Tenbarge of Haubstadt. Survivors also include 31 grandchildren, 39 great-grandchildren, her sister, Rosalee Scheller, and three sisters-in-law: Mary Schmitt, Catherine and Rosemary Tenbarge and many nieces and nephews. In addition to her parents, Mary Jane was preceded in death by her husband of 54 years, Wilfred Tenbarge on June 12, 2002; her father & mother-in-law, Leo & Lula Tenbarge; brothers, Anthony, Fred and Ivan Schmitt; sisters-in-law Magdalen Schmitt, Anita Tenbarge, Connie Tenbarge and Melinda Schmitt, Lillian Elpers, and brothers-in-law Arthur Scheller, James Tenbarge, Francis Tenbarge, Sylverius Tenbarge, Clemons Schmitt, Melvin Tenbarge, and Raphael Elpers. There will be a Mass of Christian Burial at 10:00 am, Monday June 7, 2021 at Sts. Peter and Paul Catholic Church, Reverend Tyler Tenbarge officiating. Burial will follow in the Sts. Peter and Paul church cemetery. Visitation will be held at Pierre Funeral Home, 2601 W. Franklin Street, Evansville, IN from 1:00-7:00 pm on Sunday, June 6 with a prayer service at 6:30 pm. In lieu of flowers, memorial contributions may be made to Sts. Peter and Paul Catholic Church, 211 N. Vine Street, Haubstadt, IN 47639 for the care and upkeep of the Meditation Garden or to The Father Deydier House of Discernment, 2701 W. Franklin Street, Evansville, IN 47712. Condolences may be made to the family online at www.pierrefuneralhome.com.

Mary Jane Tenbarge, 95, a lifelong Indiana resident of Haubstadt and Poseyville &#8211; passed away at her home in the early hours of Memorial Day, May 31, 2021. She was born the daughter of Adam and Tillie (Elpers) Schmitt of Poseyville on... View Obituary & Service Information

The family of Mary Jane Tenbarge created this Life Tributes page to make it easy to share your memories.

Send flowers to the Tenbarge family.