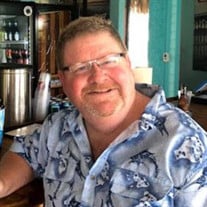 Matthew “Bubba” Hoffmann, 52, of Evansville, passed Monday, May 25, 2020 at Deaconess Hospital Midtown Campus. Matt was born March 13, 1968 in Evansville to the late Jerome and Norma (Elpers) Hoffmann. He worked as an employment specialist with ARC of Evansville and served as the chairperson for the Evansville Vanderburgh Advisory Board for Disability Services. He was also a member of the Riverbend Association; a former member of St. Wendel Catholic Church and Sacred Heart Catholic Church. Matt was known to family and friends as Bubba. He enjoyed grilling and tailgating at Colts games. In late December, he was known as Bubba Claus. He would be dressed in blue from head to toe rooting on his beloved Indianapolis Colts. Bubba lived an adventurous life that took him to every corner of the United States and beyond. His constant smile and laughter brought joy to thousands across the Hoosier state and beyond. Grill master, beloved husband and son, youngest brother, overall great guy are just a few words used to describe him. His heart was so big he continued giving even beyond his own life. Because of Bubba, others in need will receive organs and go on to live full healthy lives. Surviving Bubba are his wife, Regina (Prater) Hoffman; sisters, Debra (David) Stevens of Nokomis, FL, Brenda Phillips of Newburgh, Ellen (Larry) Howard of Nokomis, FL, Cheryl (Mark) Haskins and Susie (Brad) Taylor, both of Evansville; brothers, John (Mary Sue) Hoffman of Monrovia, IN, George (Jan) Hoffman of Evansville and Chris (Cathy) Hoffman of Wadesville; a stepdaughter, Kirsten Cowgill and stepson, Theoren Cowgill. He was be missed by all, but especially nineteen nieces and nephews and eleven great nieces and nephews who hold him near and dear to their hearts. He will also be missed by his trusted friend and companion, Shorty. Visitation and funeral services for Matt will be private. Pierre Funeral Home is handling arrangements. There will be an informal, public celebration of Bubba’s life held on Friday, May 29, 2020 outside at the Knights of St. John in St. Wendel from 4:00 until 8:00 PM. Memorial contributions may be made to the ARC of Evansville, 615 W. Virginia Street, Evansville, IN 47710. Condolences may be made online at www.pierrefuneralhome.com.

Matthew &#8220;Bubba&#8221; Hoffmann, 52, of Evansville, passed Monday, May 25, 2020 at Deaconess Hospital Midtown Campus. Matt was born March 13, 1968 in Evansville to the late Jerome and Norma (Elpers) Hoffmann. He worked as an employment... View Obituary & Service Information

The family of Matthew L. Hoffmann created this Life Tributes page to make it easy to share your memories.

Send flowers to the Hoffmann family.