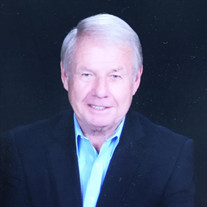 He came into the world during a flood, inheriting the strong, German genes of his mother who hopped in a rowboat while in labor for the voyage to the hospital. Ralph Koressel has left us after 84 years, defying odds and displaying that sturdy genetic makeup until the very end. Born during Evansville’s famous 1937 flood, he grew up the second of four in a modest house on the West Side. He attended St. Boniface, Mater Dei, and Industrial Arts, where he learned the craft that would become not only his career but also his passion and how he expressed his creative, inventive mind. After a brief Army stint where he served as a medic, he began his career hanging neon displays for SignCrafters. Following a steady rise from journeyman electrician to estimator to business leader and owner, Ralph’s unique combination of street smarts and steely determination enabled him to succeed in a competitive commercial market. Because of his expertise in this area, he volunteered for two mission trips to Haiti to bring electricity to impoverished towns. As a member of the West Side Nut Club, the Evansville Country Club, and PGA West, he enjoyed networking with businessmen, building a solid reputation at the helm of Premier Electric, which he and his wife, Judy, co-founded and ran for fifteen years. They were a team, both professionally and personally, raising two daughters and balancing work and fun. Avid golfers, Ralph and Judy spent winters in La Quinta, California, enjoying their view from the 11th hole of the Palmer Course. Ralph lived life on his terms, with an amazing ability to figure things out without ever looking at the instructions. He achieved success through hard work, determination, and a deep sense of curiosity. There wasn’t a gizmo or gadget he didn’t own, and he spent countless nights and weekends working on projects from the simple (building a playhouse for his girls) to the complex (an in-ground pool). He was the original DIY’er. Ralph is predeceased by his loving wife, Judith Carlisle Koressel, and is survived by daughters Lori (Doug) Hudson and Kathy Koressel, brother Robert (Carolyn) Koressel, sister Carolyn Wenzel, and sister-in-law Marilyn Hoppe, grandchildren Sarah Hayden, Victor Koressel, Elliott Hudson, and Aubrey Hudson, and many nieces and nephews. Ralph was preceded in death by his parents, Raymond and Julia (Hartman) Koressel, and a brother, Charles Koressel. Friends may visit with the family from 3:00 until 6:00 PM on Monday, March 15, 2021 at Pierre Funeral Home, 2601 W. Franklin Street. Private funeral services and entombment will be held at St. Joseph Cemetery. The family would like to thank the staff at Hamilton Pointe for their loving care. In lieu of flowers, donations may be made to Heart-to-Heart Hospice, 2532 Waterbridge Way, Evansville, IN 47710, in appreciation of their caring and compassionate services. Condolences may be made online at www.pierrefuneralhome.com.

He came into the world during a flood, inheriting the strong, German genes of his mother who hopped in a rowboat while in labor for the voyage to the hospital. Ralph Koressel has left us after 84 years, defying odds and displaying that sturdy... View Obituary & Service Information

The family of Ralph E. Koressel created this Life Tributes page to make it easy to share your memories.

He came into the world during a flood, inheriting the strong,...

Send flowers to the Koressel family.