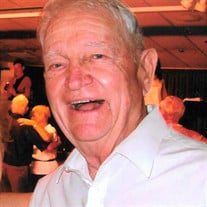 It is with great sadness that the family of Raymond Bruno Vescovi announces his peaceful passing at home, on March 4, 2021, at the age of 91 years. Ray is lovingly remembered by his daughters Lisa (Bruce) Kohl, Ellen (Eric) Mullen, Cindy Vescovi, Jenifer (Scott) Miller; and son, Robert (Kelley) Vescovi; grandchildren, Daniel Kohl, Michael Kohl, Melissa Kohl, Brandon Crane, Chris Crane, Taylor Epley, Rilee Epley, Benjamin McCullough, Saxon Reynolds, and Alexa Miller; great-grandchildren Alivia Kohl, Elle and Mia Crane, Bennett McCullough, and Denver and Clementine Reynolds. Ray was preceded in death by his loving wife of 65 years, Sue Vescovi (Richey). Ray was born in New London, Connecticut on May 10, 1929, to the late Theresa and Bruno Vescovi. Ray, a decorated athlete and scholar at Chapman Technical High School, received All-State and All-New England baseball awards in addition to the Lunwall Award for Outstanding Scholar Athlete. He was awarded a baseball scholarship to attend the University of Vermont where he served as team captain for two years, and received All-New England and Yankee Conference recognition. In 1986, Ray was inducted in the University of Vermont Athletic Hall of Fame. Upon graduation in 1951, he signed with the Boston Red Sox. His baseball career was interrupted by the Korean War, as Ray was drafted into the Army where he served as a First Lieutenant with the 101st Airborne Division for two years. He was recognized as a best-in-class marksman. Following his military commitment, Ray returned to baseball where he played for the Boston Red Sox AAA Club, the Louisville Colonels. He was awarded a diamond ring for the Most RBIs in his second season. In the off-season, Ray was employed by General Dynamics as a draftsman where he worked on designs for the first atomic submarine, The Nautilus, and the first ballistic submarine, The George Washington. Salaries for baseball players are not what they are today and after three years in the professional ranks, he retired from baseball and settled in Evansville, IN to raise his family. Ray elected to enter the teaching field, receiving his Master’s Degree from Indiana University in 1958. He taught in the Evansville-Vanderburgh School Corporation for 41 years, and served as a high school and college football and basketball official for 39 years. Ray refereed the NCAA regionals as well. Within the Evansville community, Ray was a member of Resurrection Catholic Church, the Italian American Club, American Legion-Post #8, Knights of Columbus, Eagles, R-Men’s Club, Kappa Sigma Fraternity, the University of Vermont Varsity Club and Hall of Fame Club. There will be a Mass of Christian Burial held at 10:00 AM CST on Friday, March 12, 2021 at Resurrection Catholic Church, 5301 New Harmony Road, Evansville, IN. Ray’s final resting place will be in St. Joseph Catholic Cemetery, 2500 Mesker Park Drive, Evansville, IN, where the Vanderburgh County Retired Veterans Memorial Club will conduct military rites. Friends may visit with the family from 3:00 until 7:00 PM on Thursday, March 11, 2021 at Pierre Funeral Home, 2601 W Franklin Street, Evansville, IN and from 9:30 AM until service time on Friday at Resurrection Catholic Church. Condolences may be made online at www.pierrefuneralhome.com.

It is with great sadness that the family of Raymond Bruno Vescovi announces his peaceful passing at home, on March 4, 2021, at the age of 91 years. Ray is lovingly remembered by his daughters Lisa (Bruce) Kohl, Ellen (Eric) Mullen, Cindy Vescovi,... View Obituary & Service Information

The family of Raymond Bruno Vescovi created this Life Tributes page to make it easy to share your memories.

It is with great sadness that the family of Raymond Bruno Vescovi...

Send flowers to the Vescovi family.