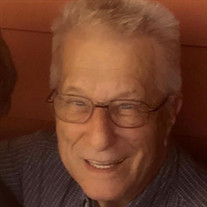 Rex M. Strange, 82, of Evansville, passed away Monday, November 23, 2020 at Deaconess Hospital Midtown Campus. Rex was born December 7, 1937 in Evansville to the late Clarence Edward and Marcella Marie (Davis) Strange. He was a 1956 graduate of Mater Dei High School, attended Evansville College and was a veteran of the United States Army. Rex was very strong in his Catholic faith and had great respect for his country as evidenced by the flagpole he and his brothers erected together at the corner of Hollywood and Broadway Avenue. He raised the American flag there every day. Rex retired from General Electric in Mt. Vernon and was a life member of St. Agnes Catholic Church. He loved spending time with his family, was very active in his grandchildren’s lives and never missed one of their ballgames. Surviving Rex are a daughter, Rebecca (Mark) Smith; two sons, Rex Meade Strange and Timothy Strange; two sisters, Mary Cooper and Gail Wirtes; a brother, John Strange; sister-in-law, Garlena Strange; three grandchildren, Emily Gravenhorst Abendroth, Hunter Hoffman and Andrew Hoffman and two great grandchildren, Wesley and Parker. In addition to his parents, Rex was preceded in death by his wife, Linda Ruth (Parker) Strange; by sisters, Eileen Happe, Margaret Wathen and Betty Lou Wolf and by brothers, Willard, Leo, Edward and Russell Strange. Due to the pandemic, the visitation and Mass of Christian Burial at St. Agnes Catholic Church will be private. Burial will take place in St. Joseph Cemetery. Condolences may be made online at www.pierrefuneralhome.com.

The family of Rex M. Strange created this Life Tributes page to make it easy to share your memories.

Send flowers to the Strange family.