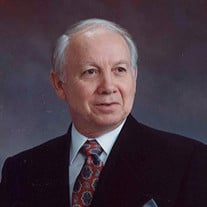 Richard D. Abell, age 77, of Jasper passed away on December 21st, 2020 at Jasper Memorial Hospital. Richard was born in Louisville, KY on August 10th, 1943 to Russel and Maxine (Albin) Abell and moved to Birdseye, Indiana shortly thereafter. He married Janet Mehringer on June 19th, 1965 at St. Joseph’s Catholic Church in Jasper, IN. Richard graduated from Birdseye High School in 1961. He went on to receive his B.S. from Oakland City University and his M.S. at Indiana State University. Richard’s passion was education. He began his career in 1965 at Ireland and Holland High Schools, where he taught physics for five years. He followed that experience with 33 years at Jasper High School. He loved to teach math and science, particularly geometry and physics, and he always enjoyed following the lives of his former students. Richard was a member of St. Joseph’s Catholic Church in Jasper. He served on the Supervisory Committee and Board of Directors for 25 years at Dubois-Pike Federal Credit Union. Richard’s greatest joy was spending time with his family and friends. One of Richard’s favorite past times was golfing with his longtime friends, Pat Mullen, Del Steinhart, and Joe Rohleder. He also enjoyed golfing with his family, hiking, and woodworking. Surviving are his wife, Janet, of 55 years; three children, Greg (Micki) Abell (Jasper, IN), Gina (Joe) Gratz (Mt. Vernon, IN), and Natalie (Scott Tumey) Abell (Ann Arbor, MI); and five grandchildren, Lane and Riley Abell, and Austin, Andrew and Savannah Gratz. Also surviving are brother Kermit (Judy) Abell (Pittsboro, IN) and sisters Kaye (Bobby) Bauer and Joyce Abell (Birdseye, IN). Cremation was chosen, and, due to the pandemic, there will be no funeral services. Entombment will be in Fairview Cemetery Mausoleum in Jasper. The family would like to thank his friends and the staff at Jasper Memorial Hospital for their compassion and care of Richard. Condolences may be made online at www.pierrefuneralhome.com.

The family of Richard D Abell created this Life Tributes page to make it easy to share your memories.

Send flowers to the Abell family.