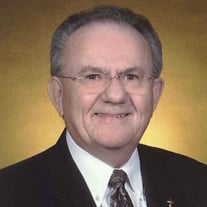 Richard Vincent “Dick” Grannan, 83, of Evansville, passed away Wednesday, August 12, 2020 at his home after a long battle with Parkinson’s Disease. Dick was born March 8, 1937 in Dearborn, MI to the late Adrian and Cecelia (Wilson) Grannan. He attended St. Joseph Catholic grade school and was a 1955 graduate of Mater Dei High School. After high school, Dick enrolled in the St. Meinrad School of Theology for one year and then enlisted in the U.S. Navy/Air Force to dutifully serve his country until 1959. After the armed forces, Dick married Patricia Anne Happel. Together they celebrated 60 years of marriage before her passing on April 8, 2020. Dick received a Bachelor’s Degree from the University of Evansville in business. He entered the Deaconate Program within the Catholic Diocese of Evansville and spiritually served his church and community for over 35 years. He retired from Gerber Food Products. Those that knew Dick closely new of his love for his family and his enjoyment of horse racing. He possessed a true gaming desire to win. His most passionate trait included his genuine desire to spiritually assist others in life. Surviving Dick are his children, Michele (Mark) Jolly, James (Cara) Grannan and Gerald (Judy) Grannan; five sisters, Theresa Vetter, Wilma (Jay) Kerner, Patty (Bob) Miller, Thelma Boarman, Siggi (Larry) Hamilton; grandchildren, Emily (Drew) Robards, Lesley (Chad) Goelzhauser, Logan Grannan, Anthony (Donna) Catanese, Jessica Grannan and Gerald R. (Arielle) Grannan and five great grandchildren. In addition to his wife and parents, Dick was preceded in death by a sister, Jeanie Boarman. There will be a Mass of Christian Burial held at 10:30 AM on Saturday, August 15, 2020 at St. Agnes Catholic Church, Bishop Joseph Siegel presiding. Burial will follow in St. Joseph Catholic Cemetery. Friends may visit with the family from 4:00 until 8:00 PM on Friday at Pierre Funeral Home, 2601 W. Franklin Street and from 10:00 AM until service time on Saturday at St. Agnes Catholic Church, 1600 Glendale Ave. Per current guidelines from the CDC and governor of the state of Indiana, masks must be worn at all times during the services. The family would like to extend a special thank you to all of Dick’s caregivers who allowed him to leave this world on his own terms, Jerry Grannan, Shelly Jolly, Leann Bixby, Trish Overton, Mike Zinkan, Mary Ann Strawn, Janice Jeffries, Ann Boyd, Maryfaye Culley and the entire staff of MSA Hospice. In lieu of flowers, memorial contributions may be made to St. Boniface Parish, c/o St. Agnes Church, 1600 Glendale Ave, Evansville, IN 47712. Condolences may be made online at www.pierrefuneralhome.com.

The family of Richard Vincent Grannan created this Life Tributes page to make it easy to share your memories.

Send flowers to the Grannan family.