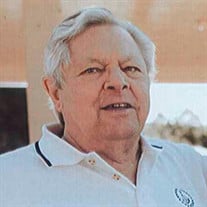 Robert F. Doerr, 77, of Evansville, passed away Saturday, October 30, 2021 at Deaconess Hospital Midtown Campus. Bob was a 1961 graduate of Mater Dei High School and worked for the L&N/CSX Railroad for 25 years before his retirement. Bob also served on the Perry Township Fire Department from 1973 to 2004 and served as the Fire Chief from 1990 to 2003. Bob was also a member of St. Boniface Catholic Church, the United Transportation Union; an avid die cast car collector, drag racer and motorcycle rider. He enjoyed attending his grandchildren’s sporting events, going to the flea market and repairing lawn mowers and small engines. Bob was the neighborhood lawnmower repairman, often only charging what the cost of the parts were for the repair. He also enjoyed working on and restoring his 1967 Ford Mustang. It was Bob’s Saturday night ritual to attend Mass with his family and then go out to dinner with them. Surviving Bob are two daughters, Tracy (Mark) MacGregor and Angie (Tony) Roybal; grandchildren, Lindsey (Danny) Griffin, Stephanie (Robert) Plummer, Sydney Seyfarth, McKayla Seyfarth and Brian MacGregor and three great grandchildren, Baylee and Archer Griffin and Luke Plummer. Bob was preceded in death by his wife of 53 years, Marlane (Waelde) Doerr in 2017; by a son, Robbie Doerr in 2019; by sisters, Evelyn Scott, Louise Carl and Lois Gibson and by two brothers, Jack and John Doerr. There will be a Mass of Christian Burial held at 10:00 AM on Friday, November 5, 2021 at St. Boniface Catholic Church, Rev. John Brosmer officiating. Entombment will follow in St. Joseph Catholic Cemetery. Friends may visit with the family from 3:00 until 7:00 PM on Thursday at Pierre Funeral Home, 2601 W. Franklin Street and from 9:30 AM until service time on Friday at St. Boniface Catholic Church. Memorial contributions may be made to It Takes a Village Animal Shelter, 1417 N. Stockwell Road, Evansville, IN 47715. Condolences may be made online at www.pierrefuneralhome.com.

Robert F. Doerr, 77, of Evansville, passed away Saturday, October 30, 2021 at Deaconess Hospital Midtown Campus. Bob was a 1961 graduate of Mater Dei High School and worked for the L&N/CSX Railroad for 25 years before his retirement. Bob also... View Obituary & Service Information

The family of Robert F. Doerr created this Life Tributes page to make it easy to share your memories.

Send flowers to the Doerr family.