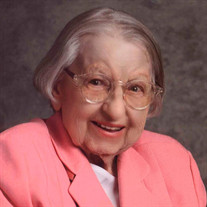 Ruby Jane Alice Schroeder, age 95 of Wadesville, Indiana passed into her heavenly rest on Wednesday, October 20, 2021 at West River Health Campus in Evansville, Indiana. Ruby was born March 26, 1926 on the Schroeder family farm in rural Wadesville to Charles and Carrie Schroeder. She felt that her introduction into the Christian faith was from her parents and grandparents as they farmed with attention to the stewardship of the land in faithful response to the Gospel. She was baptized and confirmed into the Christian faith at Zion Evangelical and Reformed Church (now Zion United Church of Christ, Lippe) and felt that the church and community that was deeply influential and supportive of her in her younger years, continued to be the most important part of her faith pilgrimage for her entire life. Ruby graduated from Wadesville High School in 1944 and worked for Mead Johnson & Co. in Evansville, Indiana with the intent to save to attend college. She graduated from the University of Evansville with degrees in Secondary Education, Speech, Drama and Music. Additionally, she earned her Master of Religious Education from Eden Theological Seminary in 1964. She graduated from Bethany Theological Seminary in 1974 with a Master of Divinity and was ordained as a minister on June 9, 1974 at Zion United Church of Christ, Lippe. Reverend Ruby Schroeder was a Director of Christian Education at St. Paul United Church of Christ in Middletown, Ohio and at the First Congregational United Church of Christ in Western Springs, Illinois as Director of Christian Education and Associate Pastor. In 1980, she was the first woman to be appointed as a full-time professor at Eden Theological Seminary and continued her love of teaching until her retirement in 1991. She retired to the home she was born in as she continued to minister, study and work with groups to further Christian Education. Musicals and dramas were an important part of Ruby’s life and she was a musician herself, learning to play the piano at a very early age. She was certified as a Specialist in Church Education, an organizer and founding member of the Association of United Church Educators and took on numerous responsibilities and memberships toward her lifelong commitment of Christian Education. She was a lifelong member of Zion United Church of Christ, the Evansville Tri-State Clergy, the Association of Professors and Researchers in Religious Education and the American Association of University Women. Professor Schroeder conducted a study tour in 1989 to East and West Berlin, Geneva and London to study educational institutions both historic and new. She also felt it a highlight of her life was the opportunity to lead 38 persons on a Reformation Tour of Germany and Switzerland and was given the honor of preaching a service at the church in Germany where her forefathers had worshiped. Ruby was a proud supporter of Mesker Park Zoo, giving annual donations and special projects in the name of her family. She was a dedicated Chicago Cubs fan, often attending games with her Uncle John. Ruby is survived by nieces; Joan (Stan) Nevill of Evansville, IN, Debra (Ronald) Linstromberg of Hudson, IN, Ann (Glenn “Butch”) Proctor of Indianapolis, IN; nephews; Robert D. (Linda) Juncker of Mt. Vernon, IN, Randy (Jennifer) Juncker of Mt. Vernon, IN, and Brian (Pamela) Juncker of Haubstadt, IN; great nieces: Carrie (Ken) Ellspermann, Laura N. Cox of Evansville, Sarah Linstromberg of Auburn, IN, Lisa (Cal) Springsteen of Holland, MI, Jennifer (Adam) Heim of Chicago, IL, Theresa Sumbles of Mt. Vernon, IN, Jamie Grabert of Montclar, CA and Kellie (David) Jensen of Memphis, TN, and great nephews; Matthew (Chrissy) Nevill of Boston, MA, Ryan (Anna) Linstromberg of Granger, IN, Jason (Megan) Linstromberg of Fort Wayne, IN, Michael (Hillary) Juncker of Evansville, IN and Shawn (Maggie) Spindler of Dillsboro, IN. The family appreciates the compassionate and respectful care provided by the staff of the West River Health Campus as well as Heritage Hospice of Evansville. A Celebration of Life service will be held at a later date. Memorial contributions may be made to Zion-Zippe UCC Church at 9000 Copperline Road, Mt. Vernon, IN 47620.

The family of Ruby Jane Schroeder created this Life Tributes page to make it easy to share your memories.

Send flowers to the Schroeder family.