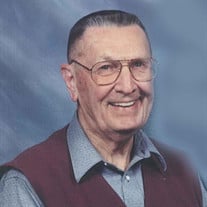 On October 14, 2020, one good man stepped into glory. Russell Ellis “Bud” Lomax was born on January 9, 1924 and lived a very full life. After graduating from Bosse High School in 1942, he immediately joined the Army and began to serve his country. In 1943, he began a 2-year deployment where he fought in North Africa, Sicily, France (Normandy Beach, D-Day 4), the Battle of the Bulge, and Germany. While overseas, he earned two Purple Hearts, a Bronze Star, and the French Legion Medal of Honor, which he was awarded in 2017 at VFW Post 1114. Upon returning from the war, he met his loving wife of 71 years, Rose Ann (Schnur) Lomax. Together, they built a wonderful life and had six children. Bud greatly enjoyed the camaraderie and serving in the West Side Nut Club for 46 years. He was also a member of Germania Maennerchor, where he sang in the Men’s Choir, VFW Post #1114 and St. Boniface Catholic Church. Preceding Bud in death are his parents, Carrie and Russell Lomax; brothers, Bruce and Jack; sister, Mary Aileen; granddaughter, Rachel Mae Lomax and his daughter-in-law, Barbara Jean Lomax. Surviving are his wife, Rose Ann; children, Karen Reis, Nancy (Bruce) Wisthoff, John (Patty) Lomax, Joni Simpson, Tom (Valerie) Lomax and Dan Lomax. He was a fun-loving grandfather to nineteen grandchildren and eleven great grandchildren. There will be a graveside service held at St. Joseph Cemetery for immediate and extended family only, Rev. John Brosmer and the Vanderburgh County Retired Veterans Memorial Club officiating. The family would like to extend their sincere gratitude to the nursing staff at the Linda E. White Hospice House. These ladies gave Bud dignity, grace, and peace in his final days. So, of course, we ask that in lieu of flowers, memorial contributions be made to the Linda E. White Hospice House. Condolences may be made online at www.pierrefuneralhome.com.

The family of Russell "Bud" Lomax created this Life Tributes page to make it easy to share your memories.

Send flowers to the Lomax family.