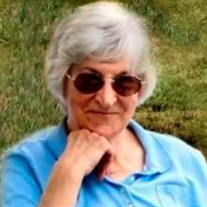 Sue J. Clark, 85, of Evansville, passed away Tuesday, February 22, 2022 at the Good Samaritan Home. Sue was born July 7, 1936 in Moorman, Kentucky to the late Frank and Myrtle Glenn (Burden) Ralph. She graduated from Bremen High School in Bremen, KY before moving to Evansville, IN with her family where she spent most of her life. She later moved to Cincinnati, OH where she spent a decade with her brother and his wife. Sue was a kind, caring person who loved reading, traveling, and being around her family and grandchildren. On holidays, she made the best chocolate pies ever. She loved all animals, and especially had a passion for dogs. She was never without their companionship. While in Cincinnati, she enjoyed the dog sport of agility and traveling to dog shows with friends. Surviving Sue are two daughters, Pam (Ron) Hart and Stephanie Jones; a son, Carlos Mitchell (Karen) Vanover; sister, Carrie Lou Bradford; brother, Wayne (Phyllis) Ralph; grandchildren, April (Chris) Benken, Ted (Will) Vanover, Cassidy (Sam) Fetscher, Kyle (Teah) Jones, Emily (David) Hicks and Matthew Hart and great grandchildren, Ainsley, Rowan, Owen, Blake, Kannon and Anna. In addition to her parents, Sue was preceded in death by a sister-in-law, Linda Ralph; brother-in-law, Tom Bradford and by a great grandson, Caleb. There will be a celebration of Sue’s life held from 1:00 until 3:00 PM on Saturday, March 19, 2022 at Glory Road Baptist Church, 2229 W. Indiana Street, Evansville, IN 47712. She will be buried in Tupman Cemetery. The family would like to extend a special thank you to the staff of the Good Samaritan Home for the kind and compassionate care given to Sue during her time there. In lieu of flowers, memorial contributions may be made to the Alzheimer’s Association. Pierre Funeral Home is assisting with arrangements and condolences may be made online at www.pierrefuneralhome.com.

The family of Sue J. Clark created this Life Tributes page to make it easy to share your memories.

Send flowers to the Clark family.