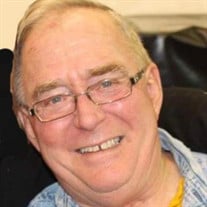 Thomas Allen Kirsch, age 71, of Evansville, passed away at his home surrounded by his family on Saturday, July 17, 2021. Tom was born January 31, 1950 in Evansville to the late Charles Jacob and Loyola Mary (Wolf) Kirsch. He and his wife, Dolores, raised nine children together and they had a great love for the church. He was a faithful member of St. Philip Catholic Church, where he was inducted into the Simon Brute` Society for his service to the church. Tom was ordained a Deacon of the Diocese of Evansville in 2013; he was a member of the Knights of Columbus; an avid supporter of Posey County Right to Life and the Little Sisters of the Poor. Tom was a member of Plumbers and Steamfitters Local 136 and served many elderly people through his trade, manual labor, his friendship and genuine love. Surviving Tom are his wife of 49 years, Dolores (Wolf) Kirsch; daughters, Cathy (Chris) Nelson, Sarah (Michael) Holland, Maria (Daniel) McClure, Charlene (Philip) Nolen, Joanna (Mark) Vandendorpe, Elizabeth Kirsch and Ravena Dowell; three sons, Thomas (Amy) Kirsch, II, Matthew (Cindy) Kirsch and Lucas (Andrea) Kirsch; sister, Loyola Mary Kirsch; brothers, Charles (Judy) Kirsch, Bernard (Pam) Kirsch, Joseph (Beth) Kirsch, Robert Kirsch and Gerard “Tony” (Donna) Kirsch; sister-in-law, Susan Kirsch; brother-in-law, Donald Tucker; twenty six grandchildren, one great grandchild; and many nieces and nephews. In addition to his parents, Tom was preceded in death by an infant son, Timothy Kirsch; by a sister, Elizabeth Tucker and brother, Michael Kirsch. There will be a Mass of Christian Burial held at 10:30 AM on Wednesday, July 21, 2021 at St. Philip Catholic Church, Rev. Ryan Hilderbrand officiating. Burial will follow in the St. Philip Church Cemetery. Friends may visit with the family from 2:00 until 8:00 PM on Tuesday at Pierre Funeral Home, 2601 W. Franklin Street, where there will be a memorial service conducted by the church at 5:30 PM. Friends may also visit with the family from 9:00 AM until service time on Wednesday at St. Philip Catholic Church. In lieu of flowers, memorial contributions may be made to Posey County Right to Life, Riley Children’s Hospital or to St. Philip Catholic Church. Condolences may be made online at www.pierrefuneralhome.com.

Thomas Allen Kirsch, age 71, of Evansville, passed away at his home surrounded by his family on Saturday, July 17, 2021. Tom was born January 31, 1950 in Evansville to the late Charles Jacob and Loyola Mary (Wolf) Kirsch. He and his wife,... View Obituary & Service Information

The family of Thomas Allen Kirsch created this Life Tributes page to make it easy to share your memories.

Thomas Allen Kirsch, age 71, of Evansville, passed away at his...

Send flowers to the Kirsch family.