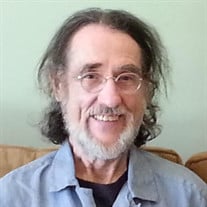 Thomas Joseph “Tom” Martin, 75, of Evansville, passed away Tuesday, March 1, 2022 at his home. Tom was born January 29, 1947 in Evansville to the late Charles Keck and Mary Magdalen (Lincoln) Martin. He worked as a letter carrier for the United States Postal Service and later retired from Deig Brothers Construction. He loved his children, grandchildren and family. Tom was a creative writer who kept years worth of hand-written journals; an artist who loved to paint and draw; and as a nature lover, Tom enjoyed bicycling, hiking and observing wildlife. He was also deeply spiritual; he rejected organized religion and practiced vegetarianism for 46 years. Surviving Tom are his three sons and daughter, Jason Martin of Greensboro, NC and children, Zoey and Lyla Martin; Jordan (Jillian) Martin of Elmhurst, IL and their children, Miles, Hazel and Cooper Martin; Sean Martin of Washington, D.C., and Hali Martin of Indianapolis, IN; one brother, Charles Richard “Dick” (Becky) Martin of Evansville and two sisters, Patricia “Patty” (Rick) Fisher of Evansville and Kathy (Keith) Tenbarge of Mt. Vernon, IN. In addition to his parents, Tom was preceded in death by an infant brother, Danny Paul Martin in 1960. Funeral services for Tom will be held at 10:00 AM Monday, March 7, 2022 at Pierre Funeral Home. Burial will follow in St. Joseph Cemetery. Friends may visit with the family from 1:00 until 5:00 PM on Sunday and from 9:00 AM until service time on Monday at Pierre Funeral Home, 2601 W. Franklin Street. In lieu of flowers, memorial contributions may be made to Our Lady of Guadalupe Monastery, 8502 W. Pinchot Ave, Phoenix, AZ 85037 or online at olgmonastery.com. Condolences may be made online at www.pierrefuneralhome.com.

The family of Thomas Joseph Martin created this Life Tributes page to make it easy to share your memories.

Send flowers to the Martin family.