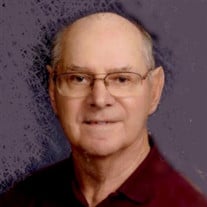 Thomas E. “Tom” Scheller, 85, of Evansville, was called to his heavenly Father’s home on Thursday, July 1, 2021. He was born on March 11, 1936 to the late Frank and Alida (Engbers) Scheller. Tom was a lifetime member of Carpenter’s Local #90. He worked twenty five years for Chris Nix Construction, five years at Ansco, Inc. and ten years for Deig Brothers Construction before retiring in 1998. He was a member of St. Paul’s United Church of Christ German Township; serving on the Burgoo and the Spring Sale Committees. He was a member of the River Bend Association, Twin Towers and Darmstadt Retiree’s Club. Tom served his country in the Army National Guard from 1958 to 1964. He graduated from Mater Dei High School in 1954; where he played football, was on the school’s first wrestling team in 1951 and was a wrestling state qualifier in 1954. Tom was a member of Mater Dei’s Men’s Club attending nearly every football game since the school started in 1949. He was a volunteer at West River and Pine Haven Nursing Homes, singing karaoke for the residents. He was also a volunteer for Habitat for Humanity. In his younger days, Tom enjoyed ice skating and performed in the local ice show “New Blades”. Tom is survived by his two beautiful daughters, Beth (John) Hart and Sue (John) Helfert, grandchildren, Matt (Jayme) Koester, Lauren (Bill) Shaltis, Nick Helfert and Michelle Helfert; sisters, Rosemary Humphrey and Joyce Barton of Evansville, Francie (Ron) Hess of Crawfordsville, IN and Rita (Phil) Radizwon of Corral Springs, FL. In addition to his parents, Tom was preceded in death by his wife of 59 years, Sharon, a sister, Charlotte Brinker and by brothers in law, Elmer Humphrey, Bob Barton, Donald Brinker and Russell Goad. Funeral services for Tom will be held at 11:00 A.M. on Wednesday, July 7, 2021 at Pierre Funeral Home, Rev. Gordon Jones officiating. Burial will follow in the St. Paul’s United Church of Christ Cemetery. Friends may visit with the family from 3:00 P.M. until 8:00 P.M. Tuesday and from 9:30 A.M. until service time Wednesday at Pierre Funeral Home, 2601 W. Franklin Street. Contributions may be made to St Paul’s Church German Township, 8701 Big Cynthiana Road, Evansville, IN 47720 or Mater Dei Men’s Club, 1300 Harmony Way, Evansville, IN 47720. The family would like to extend their gratitude to West River Health Campus Legacy and Heart to Heart Hospice for all the loving care and compassion they provided. Condolences may be made online at www.pierrefuneralhome.com.

The family of Thomas E. Scheller created this Life Tributes page to make it easy to share your memories.

Send flowers to the Scheller family.