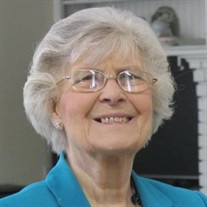 Virginia Lee Renfro Baker, of Evansville, passed away in the home of her son on Friday, March 26, 2021. She was 84 and taken quickly after a short battle with cancer. She had a full life being mother to seven children, grandmother, great-grandmother & recently great-great grandmother. Virginia was born August 17, 1936 in Clay County, Arkansas to the late Rosie and Amiel Renfro. She married Louis “L.T.” Baker at the age of 17 and became a mother to their seven children. She and Louis ministered to churches until he passed away nearly 30 years ago. Prior to Louis’s passing they pastored many churches in the General Baptist Denomination and served as missionaries in Jamaica, running the Faith Home Children’s Home for many years. After returning to the states, they continued starting new churches until the sudden death of Louis. As a widow at the age of 54, Virginia embarked on a new life, moving to Evansville, learning to drive, and getting her first hired job working in home healthcare taking care of patients. She continued her mission work, embarking on many short term medical/dental trips to Honduras as her life continued being centered around her church, Westwood where she volunteered countless hours in ministry. Whether it was serving in the kitchen for Vacation Bible School, coordinating small group devotions, running the Life Choice Center kitchen for their Fall Festival booth fundraising efforts, or encouraging families from her vast experience as a pastor’s wife and missionary, she dedicated her life to God and served him. She was a caregiver to many. She loved God, her church and her family (biological & nonbiological) deeply. We are comforted knowing she is with Him and back with the love her life, L.T. Baker Surviving Virginia are her two remaining siblings, Juanita (Irvin) Moody and Gaylon (Ledicia) Renfro; seven children, Debbie (Joe) York, Vickey (Kenny) Phillips, Ron (Debbie) Baker, Rick (Margaret) Baker, Pam (Chris) Bongfeldt, Russ (Kinsey) Baker and Randy (Karen) Baker, 21 grandchildren, multiple great-grandchildren and one great-great-grandchild. Virginia was preceded in death by her husband, Rev. Louis Baker; by her sister Marilyn Roby, her brother Junior Renfro and a grandson, Brandon Walker. Funeral services for Virginia will begin at 10:00 A.M. on Wednesday, March 31, 2021 at Westwood Church, Pastor Dave Teruel and Pastor Ben Russell officiating. Burial will follow in Manitou, Ky at the Concord General Baptist Church Cemetery. Friends may visit with the family from 3:00 P.M. until 7:00 P.M. on Tuesday at Pierre Funeral Home and from 9:00 A.M. until service time on Wednesday at Westwood Church. Online condolences may be made at www.pierrefuneralhome.com. Memorial contributions may be made to Westwood Church.

Virginia Lee Renfro Baker, of Evansville, passed away in the home of her son on Friday, March 26, 2021. She was 84 and taken quickly after a short battle with cancer. She had a full life being mother to seven children, grandmother, great-grandmother... View Obituary & Service Information

The family of Virginia L Baker created this Life Tributes page to make it easy to share your memories.

Virginia Lee Renfro Baker, of Evansville, passed away in the...

Send flowers to the Baker family.