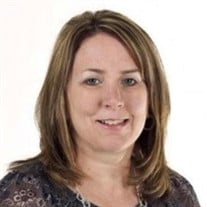 Virginia Carol “Jenny” Collins, 49, of Evansville, passed away Sunday, March 7, 2021 at her home surrounded by her family. Jenny was born January 31, 1972 in Evansville, IN. She earned her Master’s Degree from the University of Evansville; served as the City Controller under Mayor Weinzapfel and as the Chief Financial Officer for the Evansville Water and Sewer Utility. Jenny served the city of Evansville under three mayors. She was an active member of St. Joseph Catholic Church in Vanderburgh County and also served on the Board of Directors of the Mesker Park Zoo Advisory Board. Surviving Jenny are her husband of 30 years and high school sweetheart, Michael Collins; one daughter, Audrie Collins; two sons, Tyler (Megan Gresham) Collins and Evan (Katie) Collins; her mother, Carol Ashmore; brother, Richard Caleb (Sheila) Dauphin and one grandchild on the way, Osborne Collins. Jenny was preceded in death by her father who raised her, Louis Richard Dauphin, Jr. and by her biological father that she met at the age of 45, Keith Stewart. There will be a Mass of Christian Burial held at 10:00 AM on Saturday, March 13, 2021, Rev. Eugene Schroeder officiating. Burial will follow in St. Joseph Catholic Cemetery on Mesker Park Drive. Friends may visit with the family from 2:00 until 8:00 PM on Friday at Pierre Funeral Home, 2601 W. Franklin Street and from 9:30 AM until service time on Saturday at St. Joseph Catholic Church, 6202 W. St. Joseph Road, Evansville, IN 47720. Memorial contributions may be made to the Mesker Park Zoo Kenny Penguin Fund, 1545 Mesker Park Drive, Evansville, IN 47720. Condolences may be made online at www.pierrefuneralhome.com.

The family of Virginia "Jenny" Collins created this Life Tributes page to make it easy to share your memories.

Send flowers to the Collins family.