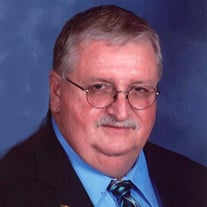 William R. “Bill” Andrews, 69, of Evansville, passed away as the result of a traffic accident in Spencer County, IN on Friday, April 9, 2021. Bill was born September 13, 1951 in Detroit, MI to the late Vernon and Evelyn (Luna) Andrews. He worked as a driver for O’Reilly Auto Parts and also as a delivery driver for Papa John’s Pizza. Bill was a member of Corpus Christi Catholic Church and a devoted member of the Knights of Columbus at Corpus Christi. He enjoyed drag racing and had owned and driven his own drag car, “The Witch Doctor”. Surviving Bill are his wife of 46 years, Becky (Fox) Andrews; daughters, Amy Andrews and Jane (Brad) Butze; sons, John (Janet) Andrews and Matthew Andrews; a sister, Joanie (Larry) Christie; eight grandchildren, Zeke Andrews, Maddie Brown, Steven Brown, Nate Andrews, Audrey Brown, Sam Andrews, Elizabeth Butze and Izzy Butze; a sister-in-law and brother-in-law, Mary Kay and David Fitzgerald; many nieces, nephews, and cousins. In addition to his parents, Bill was preceded in death by a brother, Jonathan Andrews. There will be a Mass of Christian Burial held at 10:00 AM on Tuesday, April 13, 2021 at Corpus Christi Catholic Church, Rev. Tyler Tenbarge officiating. Burial will follow in St. Joseph Catholic Cemetery. Friends may visit with the family from 3:00 until 7:00 PM on Monday at Pierre Funeral Home, 2601 W. Franklin Street and from 9:30 AM until service time on Tuesday at Corpus Christi Catholic Church, 5528 Hogue Road, Evansville, IN 47712. Memorial contributions may be made to the Knights of Columbus at Corpus Christi. Condolences may be made online at www.pierrefuneralhome.com.

The family of William R. Andrews created this Life Tributes page to make it easy to share your memories.

Send flowers to the Andrews family.