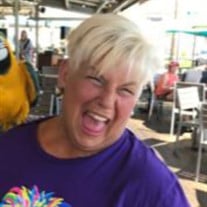 Zandra D. Hicks, 67, of Earlington, KY passed away Sunday, January 24, 2021 at Deaconess Hospital Gateway Campus in Newburgh, IN. Zandra was born April 29, 1953 in Madisonville, KY to the late Edward “Trigger” and Thelma Smith. She retired from the Green River Correctional Complex where she worked as a corrections officer and was currently working for the Madisonville Police Department as a crossing guard. Zandra was a devoted wife, mother, grandmother, sister, aunt and friend to so many. She never met a stranger and always had a smile on her face. Zandra could light up a room and loved to talk. She loved to spend time with her family and friends. Surviving Zandra are her husband of 30 years, Jim Hicks, Jr.; her brother, Rockye (Kim) Smith; daughter, Andrea (Kenny) Goodloe of Madisonville; son, Brandon Pendley of Mortons Gap; her stepmother, Linda Smith; stepdaughter, Lori (Bobby) Humphries of Madisonville; stepson, Jim Hicks, III of Earlington; five grandchildren, Brooke (Amadi) Bullock, Zeph Laster, Kenny Goodloe, II, Grace Laster, Mercy Sutton and Kole Ray Goodloe; great grandchildren, Zeke, Amari and Remi, as well as several nieces and nephews. In addition to her parents, Zandra was preceded in death by a sister, Angela Harris. Zandra’s wishes were to be cremated. There will be a memorial service held at Immanuel Baptist Church in Madisonville on Saturday, February 6, 2021 at 1:00 PM. Condolences may be made online at www.pierrefuneralhome.com.

The family of Zandra M. Hicks created this Life Tributes page to make it easy to share your memories.

Send flowers to the Hicks family.